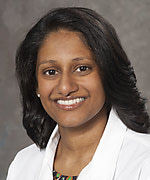 Dr. George is one of the very few physicians in the country who is fellowship trained in two Ob/Gyn sub-specialties. She is dual board certified in General Ob/Gyn and Female Pelvic Medicine and Reconstructive Surgery. She has a special interest in both complex laparoscopic surgeries and vaginal surgeries, including fistula repairs. She prides herself on providing empathic, ethical and compassionate care to her patients.

American Board of Obstetrics and Gynecology,

American Board of Obstetrics and Gynecology � Female Pelvic Medicine and Reconstructive Surgery,