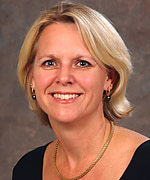 Dr. Swanson's philosophy of care emphasizes patient centered care. She strives to create an environment that is open to conversation, education, and discussion. Dr. Swanson believes a woman should play an active role in her health care.

Debra D. Swanson is a Health Sciences Clinical Professor at the UC Davis Medical Center in Obstetrics & Gynecology. In her role as Medical Director of Maternity services, she is directly involved in patient care on Labor and Delivery and supervises resident physicians and medical students. The birth of a child can be one of the happiest moments in our lives and it can also be associated with very serious medical complications.  Therefore, she initiates and oversees quality improvement projects in an effort to ensure the highest patient safety standards.

American Board of Obstetrics and Gynecology, 1996