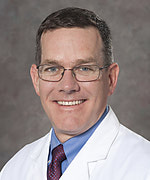 As a 24 year veteran of Army Medicine I have come to recognize that healthcare is a team sport. As such, I actively seek the cooperative input of parents and primary caregivers in the care of my patients so that the therapeutic options I provide are practical and timely to the patient’s needs.

Coordination of care with other sub-specialists is essential to the care of my patients.  I am willing to consider integrating non-traditional options in their care.   I consider it a great honor to provide for the healthcare needs of children.

As a Helms Medical Acupuncture trained physician, I provide acupuncture to appropriate patients as an adjunct to traditional treatments in the care of children with functional and motility disorders of the gut.

Dr. de Lorimier is interested in the study of functional and motility disorders of the gastrointestinal tract as well as integrating non-traditional forms of healthcare in the care of his patients.

American Board of Pediatrics, 1995

American Board of Pediatrics, Pediatric Gastroenterology/Nutrition, 2001