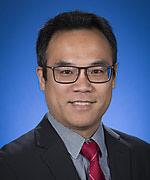 Synopsis: My current research interests focus on ion channels in BBB endothelial cells and their contributions to edema formation and inflammation in the early stages of ischemic stroke. On average, a stroke happens every 40 seconds in the United States, 87% of which are ischemic strokes. This high prevalence makes ischemic stroke the fourth leading cause of death and disability. Cerebral edema is a major cause of neuronal death in stroke. BBB endothelial cells play a prominent role in determining the volume and ionic composition of brain interstitial fluid. My current project is focused on the role and molecular mechanism of the calcium-activated K+ channel KCa3.1 in ischemia-induced edema formation. Endothelial KCa3.1 channels might produce a counterbalancing K+ efflux into the blood, which slows down edema formation by decreasing the activity of NKCCs through Cl--activated and intracellular Ca2+ signaling pathways. This is the first study evaluating a link between BBB endothelial K+ channels and edema formation in the brain and it may reveal a new therapeutic strategy for the prevention or treatment of ischemia induced cerebral edema. Other very useful applications for my study would be the treatment of traumatic brain injury or premedication of patients undergoing brain surgeries. In particular, I intend to determine the localization of KCa3.1 in BBB endothelial cells (i.e. luminal versus abluminal) by immunoEM and confocal microscopy. The relationship between KCa3.1 and intracellular Ca2+, Cl- efflux, and Na+ transport in BBB endothelial cells will be evaluated by pharmacological modulation, genetic deletion, and siRNA knockdown. The role of KCa3.1 channel activity in NKCC regulation will be studied by flux assays with an established KCa3.1 blocker or activator, and/or NKCC inhibitor and Na/K pump inhibitor. A rodent permanent MCAO model will be used to test my hypothesis using pharmacological strategies and genetic deletion model in combination with MRS& MRI imaging. I am also interesting in real-time in-vivo Ca2+ imaging by multi-photon microscopy to gain further insight into the Ca2+ signaling dynamics of the BBB endothelium and the potential contributions of the underlying astrocytic end-feet. Another focus of my research will be the role of ion channels in inflammation in the early stage of ischemic stroke. Neutrophils and microglia are two of the major immune cells present during the early stage of ischemic stroke. Studying the physiological and pathological role of ion channel in these cells might lead to the discovery of new pharmacological targets for reducing neuro-inflammation.