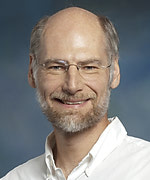 Molecular Basis of Synaptic Plasticity and the Role of Signaling Complexes.

Synopsis: Signals are transmitted from one neuron to another at the synapse, a key element for information processing and storage. Glutamate is the prevalent neurotransmitter in the brain and spinal cord. It is released from the presynaptic site upon depolarization and opens glutamate receptors at the postsynaptic site. These receptors are ligand-gated ion channels that initiate the excitation of the postsynaptic neuron. High frequency stimulation of a synapse causes a long-lasting increase in its activity known as long-term potentiation (LTP). LTP in the hippocampus and cortex is thought to constitute the physiological basis of learning and memory. Activation of Ca2+ permeable NMDA-type glutamate receptors and the subsequent rise of postsynaptic Ca2+ triggers LTP via the Ca2+/calmodulin-dependent protein kinase CaMKII and the cAMP-dependent protein kinase PKA. We are studying the spatio-temporal regulation of these kinases at postsynaptic sites and how they control glutamate receptors.

A prerequisite for efficient and specific signaling is that kinases are anchored next to their substrates. Until recently, little was known about anchoring of any kinase at postsynaptic sites. We discovered that CaMKII directly interacts in a complex manner with NMDA receptors, which serve as postsynaptic docking sites for CaMKII (Leonard et al., 1999; Bayer et al., 2001). This interaction places CaMKII at a strategically ideal location where it is most efficiently activated by NMDA receptor-mediated Ca2+ influx. We also found that the L-type Ca2+ channel Cav1.2 and the AMPA-type glutamate receptor subunit GluA1assemble signaling complexes at the postsynaptic site that controls Cav1.2 activity and GluA1 accumulation via phosphorylation by PKA (Davare et al., 2001; Joiner et al., 2010). These complexes contain the  Beta 2 adrenergic receptor, heterotrimeric Gs, adenylyl cyclase, PKA and the antagonistic phosphatase PP2A and PP2B/calcineurin. Assembly of these components into one complex explains for the first time how signaling by receptors acting through cAMP and PKA can be very fast, spatially restricted, and specific. They provide the very first glimpse into the molecular basis of how norepinephrine increases the acuity of our sensory systems and enhances learning under emotional conditions.

Glutamate receptors interact with structural proteins such as PSD-95 and alpha-actinin that regulate their postsynaptic localization and function. We are investigating whether phosphorylation alters the interaction of glutamate receptors with those structural proteins. Regulation of these interactions controls the molecular architecture of postsynaptic sites. Because maintenance of LTP involves restructuring of synaptic connections, it is crucial to understand the molecular reorganization of synapses during LTP.

We combine modern molecular/cell biological, protein biochemical, immunohistochemical, and electrophysiological methods to study the interplay of components in different cellular signaling pathways with each other and with the cytoskeleton. Synaptic plasticity is critical for learning including fear conditioning as occurring during posttraumatic stress disorder (PTSD). We study the role of these signaling events in fear conditioning and other learning behaviors. Overstimulation of glutamate receptors triggers neurological damage during stroke, epilepsy, and Alzheimer's disease. We are investigating the role of these and other similar interactions under physiological and related neuropathological conditions. We develop peptides that are membrane-permeant, specifically disruption certain interactions, and thus might be beneficial in the treatment of stroke, epilepsy, PTSD, and other neurological and mental diseases.