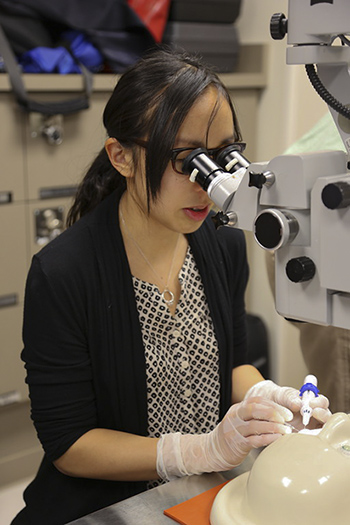 All applicants must submit their applications through SF Match

Applicants will be invited to interview on one of the following dates.
All interviews for the 2022-23 match cycle will be conducted on a virtual platform.

Applicants accepted into the ophthalmology program will automatically be matched into the integrated PGY-1 internship at UC Davis. Submission of a separate ERAS application is not necessary for the UC Davis internship.

The University of California, in compliance with Titles VI and VII of the Civil Rights of 1964, Title IX of the Education Amendments of 1972, Sections 503 and 504 of the Rehabilitation Act of 1973, the Age Discrimination Employment Act of 1967, and the Age Discrimination Act of 1975, does not discriminate on the basis of race, color, national origin, religion, sex, handicap, or age in any of its policies, procedures, or practices; nor does the University, in compliance with Section 402 of the Vietnam Era Veterans Readjustment Act of 1974, and Section 12940 of the State of California Government Code, discriminate against any employees or applicants for employment because they are disabled veterans or veterans of the Vietnam era, or because of their medical condition (as defined in Section 12926 of the California Government Code), their ancestry, or their marital status; nor does the University discriminate on the basis of citizenship, within the limits imposed by law or University policy; nor does the University discriminate on the basis of sexual orientation. This nondiscrimination policy covers admission, access, and treatment in University programs and activities, and application for and treatment in University employment.

In conformance with the University policy and pursuant to Executive Orders 11246 and 11375, Section 503 of the Rehabilitation Act of 1973, and Section 402 of the Vietnam Era Veterans Readjustment Act of 1974, the University of California is an affirmative action/equal opportunity employer.