Craniofacial surgery patient, Rhoen Papini, with mom, Amber Schayltz, getting fitted for a new helmet as part of his post-operative care.

“Everything was fine and then it wasn’t,” said Rhoen’s mom, Amber Schayltz. “We didn’t know what was happening. We were panicked.”

Amber and Rhoen’s dad, Brian Papini, were referred to UC Davis Children’s Hospital. They got the diagnosis – craniosynostosis.

This condition, typically seen in newborns, involves an abnormal skull shape with restricted brain growth. Their son’s cranial bones had grown too fast, causing pressure in his skull. Fortunately, UC Davis has a craniofacial clinic and pediatric neurosurgeons who knew what to do.

“Both doctors, Marike Zwienenberg and Craig Senders, agreed he needed cranial surgery immediately,” Schayltz said. “They patiently walked us through what would happen, confident they could help Rhoen.”

Papini said the surgeons reassured them and calmed their nerves. 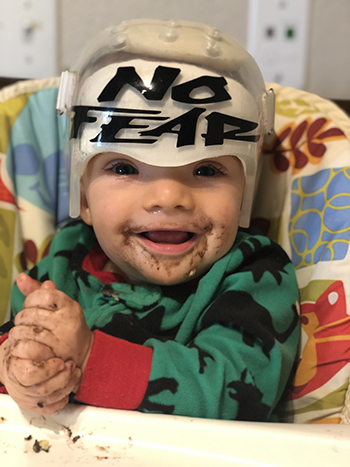 "They’re amazing physicians with equally amazing bedside manners. Both of us felt our son was in good hands,” Papini said.

In surgery, Rhoen Papini had a piece of his skull removed. The surgery was a success with no complications. Post-operative helmet therapy is all this little boy needed. Rhoen is cognitively and physically on track and celebrated his first birthday in March, a milestone his parents were thrilled to celebrate.

“I am a huge fan of UC Davis Children’s Hospital,” Schayltz said. “It is so fortunate that we have access to that level of care right here in Sacramento.”