The standing subcommittees of FEC include the:

The Committee for Research Affairs and the Committee on Honors and Awards are currently accepting nominees for annual awards.

The C. John Tupper Prize for Excellence in Teaching, is the highest teaching award given by the School of Medicine. Created by the founding dean of the UC Davis School of Medicine, this award is intended to recognize significant contributors to education.

The award is given by the School of Medicine for the educational contributions of a faculty member over a period of a career. The successful candidates may be characterized by a trajectory of sustained significant recognitions and /or may have been previously recognized (e.g, teaching awards) for their contributions to medical education at UC Davis School of Medicine. Since one of the important factors in the selection is that the awardee is widely recognized as an outstanding teacher, the Committee on Honors and Awards welcomes nominations from multiple constituencies, such as faculty, students, and staff.

Among the criteria used to judge nominees are:

Candidates may come from either clinical or basic science as well as administrative faculty within the School of Medicine. Teaching may include design of curricula in which the learning of all students is enhanced by sustained input into curricular development through contributions of time and skills.

Pre-proposal nomination letters of no more than two pages are being solicited from the faculty, alumni, staff, and students, and should describe the nominee’s qualifications, particularly those that set the candidate apart as a distinguished educator. Please include a Curriculum Vitae, teaching evaluations, contributions to diversity, equity and inclusion, and other pertinent documents. After a preliminary review, full nomination packets will be requested for the top nominees for consideration by the Committee on Honors and Awards.

The deadline for the pre-proposal nomination is February 20, 2023. Please send or email to:

The recipient of the C. John Tupper Prize for Excellence in Teaching will receive a plaque and a monetary honorarium, with announcement and presentation at the School of Medicine’s 2023 Senior and Faculty Awards Dinner.

The Hibbard Williams Award for Extraordinary Achievement recognizes contributions made to the School of Medicine’s mission that do not fall clearly into the categories of either teaching or research. This award recognizes a broad range of contributions such as public service, academic achievements that bring distinction to the university, raising its profile at a national or international level, etc. These contributions may be either singular in nature, or they may represent a long-term achievement in a particular arena. Above all, the contribution(s) must be truly exceptional. As such, the award may not be given every year, or may, on occasion, be awarded to more than one individual in a single year. Recipients of this award receive it only once.

This award requires a 1- to 2-page pre-proposal nomination that summarizes the candidate's accomplishments, trajectory, contributions to diversity, equity and inclusion, and curriculum vitae. The Committee on Honors and Awards will consider all nominations. Those appearing to be of sufficient merit will trigger a request for more documentation from each of the nominators. Because the nature of the nominees’ contributions will vary, the exact nature of the documentation will be decided on a case-by-case basis. Pre-proposal nominations may be submitted to the Committee on Honors and Awards at any time; those received after the deadline will be considered in the next awards cycle.

The deadline for the pre-proposal nominations is February 20, 2023. Please send or email to:

Since 1975, the Kaiser Foundation Hospitals have supported annual awards for excellence in teaching at the UC Davis School of Medicine and affiliated hospitals. Faculty recipients receive a plaque and a generous monetary award of $1,200 each.

There are three awards presented annually at the Senior/Faculty Awards Banquet:

The VCP consists of physicians, usually in private practice, who has voluntarily donated their time and skills to assist in medical education at the UC Davis Medical Center, VA Hospital, and other affiliated hospitals.

Undergraduate medical students, residents, and full-time faculty members are eligible to make nominations in one or more of the award categories.

Characteristics to be considered in making nominations should include enthusiasm, sincere interest in and willingness to help students and residents, ability to motivate learning, quality of lectures and teaching aids, contributions to diversity, equity and inclusion, quality of clinical (bedside) teaching, and (where appropriate) the demonstrated ability to serve as a model clinician.

These preliminary nominations are limited to all faculty members with a record of sustained excellence (>3 years) in all phases of teaching medical students. The top three nominees in each category will be placed on a ballot and resubmitted to the students. A faculty member who has received this award in the past four years is not eligible. The recipients for the last four years are listed as follows:

The generosity of the Kaiser Foundation Hospitals permits us to recognize the teaching contributions of our faculty, please carefully consider responding to this request for nominees. Nominators may nominate one candidate in each of the three categories, but nominating an individual in every category is not required. If a nominee is listed in an incorrect category by mistake, their name will be moved to the correct category.

The combined nominees received will be submitted to the student body for election of awardees in each category.

Submit the complete form to: the Committee on Honors and Awards (Attn. Lao Thao), email: lythao@ucdavis.edu

The Joan Oettinger Memorial Award is in honor of Joan Oettinger who was a UC Davis graduate student who died of lung cancer in July 1970. Her husband, Martin, was a senior lecturer in economics at UC Davis before his death in 1986. This award is presented annually during the UC Davis School of Medicine Spring General Faculty Meeting.

Nominations must be submitted electronically as one PDF packet and include the following:

Submit the completed packet electronically to: the Committee on Research Affairs, email: HS-FEC@ucdavis.edu

The School of Medicine Research Award is given to a School of Medicine faculty member in recognition of outstanding contributions to biomedical science and medicine through laboratory or clinical research. The awardee will receive a stipend of $350 and $15,000 for support of a research fellow. Candidates will be evaluated by the Committee for Research Affairs.

Nominations must be submitted electronically as one PDF packet and include the following:

Submit the completed packet electronically to: the Committee on Research Affairs, email: HS-FEC@ucdavis.edu 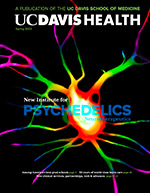