UC Davis Department of Neurology researchers are conducting research to determine the basics of astrocyte biology. Astrocytes are star-shaped brain cells that scientists have long known to be involved in the physical structuring of the brain, provide neurons with nutrients, such as glucose, and are involved in nervous system repair. 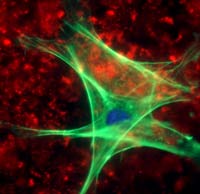 It turns out, however, that these are complicated cells. They have been implicated in disease, as well as been found to be the source of potentially self-healing stem cells. Mutant forms of astrocytes have been associated with amyotrophic lateral sclerosis (ALS, or Lou Gehrig’s disease), Alzheimer’s disease and Huntington’s disease. Recently,  scientists discovered that astrocytes can form new stem cells and are able to generate all three types of mature brain cells.

Working with animal models and cell cultures, department researchers are working to understand normal astrocyte development and function, as well as their ability to produce neural stem cells. They want to better understand what happens to these cells as a result of disease or injury, what role that might actually play in causing disease and whether they can also be prompted to transform into neurons to repair diseases of the nervous system.

Scientists have observed that inflammation, the body’s response to injury and disease, causes astrocytes to enlarge. These enlarged astrocytes are common features of patients with multiple sclerosis and in those with spinal cord injury. Department researchers are working to uncover the cellular mechanisms behind these observations with the goal of finding potential treatments.

Several UC Davis Department of Neurology faculty members studying astrocyte biology are part of the Institute for Pediatric Regenerative Medicine, a joint initiative of the Shriners Hospitals for Children Northern California and the UC Davis School of Medicine.

Find out more about the Institute for Pediatric Regenerative Medicine