Strokes, neurodegenerative disorders such as Alzheimer's disease and Huntington's disease, traumatic brain injury, and other diseases can disrupt the ability of brain cells to communicate with one another. Scientists need to understand normal brain function and brain cell communication if they are to understand what aspects of that disruption are causing disability.

To that end, UC Davis Department of Neurology researchers are studying animal models and cell cultures to discover how information is encoded, processed, and transmitted from one level of the brain to the next. 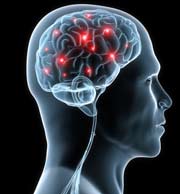 Our scientists are using the latest techniques to record electrical activity of multiple brain cells at once. By comparing the activity patterns of normal brains with the patterns of brains that have less sensitive brain cells or that have experienced the physical loss of neurons, researchers can determine how ensembles of cells — such as the ones that make up the visual system — are working together.

Department researchers are also investigating how behavior states, like attention, affect communication between cells. Scientists still do not understand how paying attention to one area of a visual scene, for example, enhances the connections between neurons. Understanding these cellular level processes will likely help scientists develop interventions for those suffering from loss of brain cell function.