Despite the fact that 750,000 people suffer strokes in the United States every year, scientists still do not fully understand the underlying causes of stroke, how brain cells are injured during a stroke, and what leads to hemorrhage, or bleeding, in the brain.

UC Davis Department of Neurology faculty members are conducting research using both human patients and animal models of stroke to understand the subtleties of these deadly incidents. They are seeking ways to improve surgical techniques for repairing brain damage following stroke, studying the ability of heat shock proteins (produced by cells under stress) to protect brain tissue from injury due to stroke, and also investigating new drug therapies for stroke. 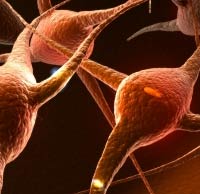 In addition, department researchers are studying strokes in diabetics to learn why these patients suffer cognitive decline more rapidly than other stroke patients. And they are trying to understand why survivors of subarachnoid aneurysm (a bulging artery in the space surrounding the brain) often develop deadly stroke within weeks.

Department of Neurology faculty members are also working on ways to find clues from a simple blood sample to that a stroke has occurred and to predict future stokes by taking smples of blood..