President Joe Biden announced this year that the Cancer Moonshot initiative he launched in 2016 as vice president has been reignited. The new Cancer Moonshot 2022 has a goal to cut cancer deaths in half over the next 25 years. The aim to end cancer as we know it will focus on increasing cancer screenings and addressing disparities within cancer care and research, both in the United States and internationally.

The 51 National Cancer Institute (NCI)-designated cancer centers, including UC Davis Comprehensive Cancer Center, will play an important role in the Cancer Moonshot. Our role will be to help accelerate scientific discovery in cancer, foster greater collaboration, and improve the sharing of data.

A Cancer Moonshot progress web page will keep the public and medical professionals in oncology updated on the latest developments.

As part of the Cancer Moonshot 2022, President Joe Biden and First Lady Jill Biden issued a call to jump-start cancer screenings that people missed as a result of the pandemic. They also want to help ensure that every American equitably benefits from the tools to prevent, detect and diagnose cancer.

UC Davis Comprehensive Cancer Center’s Laura Fejerman, director of the Women’s Cancer Research and Care Program (WeCare), met the first lady in February during a Cancer Moonshot event at the Mays Cancer Center in San Antonio, Texas. Fejerman was one of three scientists who presented on cancer health disparities research.

“It was truly an honor to participate in the Cancer Moonshot event by sharing with the first lady what we are doing at UC Davis to fight the disparities that lead to a higher cancer burden for Latinas,” said Fejerman, who also co-directs the cancer center’s Latinos United for Cancer Health Advancement (LUCHA) initiative.

Fejerman presented findings regarding cancer risk assessment in Latinas, including two factors contributing to disparities: lack of access to high-quality care and limited data availability for improving risk prediction in diverse populations. She also reported on the Tu Historia Cuenta program, which connects Latinas to “promotores” — health educators who refer Latinas to breast cancer resources in their communities.

The UC Davis Comprehensive Cancer Center’s comparative oncology program is highlighted in a new Cancer MoonshotSM video that describes approaches to researching cancer treatments in both dogs and humans.

With immune systems similar to those of people, our pet dogs can benefit from many of the same cancer breakthroughs, including immunotherapies that work by helping the immune system recognize and attack cancer cells. 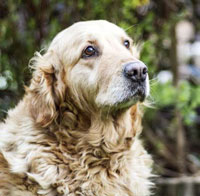 Thanks to its unique partnership with the country’s top-ranked UC Davis School of Veterinary Medicine, the cancer center is one of the few institutions to study comparative oncology — the collaborative study of tumors in dogs and humans to better understand cancer biology and test treatments.

UC Davis received the first NCI grant in the country to fund a comparative oncology training program. In this first-of-its-kind federal grant, more than $2 million has been awarded to the cancer center’s five-year program to train the next generation of oncology researchers collaborating on curing cancer in both humans and dogs.