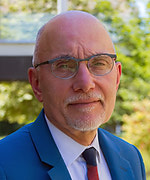 Leonard Abbeduto is director of the UC Davis MIND Institute and holds the Tsakopoulos-Vismara Endowed Chair of Psychiatry and Behavioral Sciences at UC Davis. He is a nationally recognized expert on the behavioral profiles of individuals with intellectual disabilities, with particular focus on the development and use of language by these individuals.

The MIND Institute was recently named an Intellectual and Developmental Disabilities Research Center. As one of only 15 such centers nationwide, the IDDRC is funded by the Eunice Kennedy Shriver National Institute of Child Health and Human Development. IDDRCs promote multidisciplinary research and training focused on identifying gene-behavior relationships in neurodevelopmental disorders, as well as the treatment of these conditions.

Abbeduto’s research has been funded continuously by the National Institutes of Health since 1996. He has published more than 130 articles, book chapters, reviews and books on fragile X, autism, Down syndrome and other disabilities and has delivered numerous presentations throughout the nation and the world.

Current research projects in Abbeduto’s lab examine the feasibility of using samples of spoken language collected in naturalistic contexts as outcome measures in clinical trials. His lab also is developing a multimodal intervention, including both pharmacological and behavioral components, that will target the narrative language skills of 10- to 17-year olds with fragile X syndrome. The novel intervention will be delivered to participants through distance teleconferencing and will involve parents as the agents of change in delivering the intervention to their children.