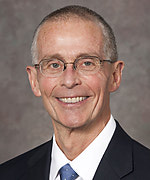 Garen J. Wintemute is a renowned expert on the public health crisis of gun violence and a pioneer in the field of injury epidemiology and prevention of firearm violence, which results in approximately 30,000 deaths a year and approximately 75,000 nonfatal injuries seen in hospital emergency departments.

Dr. Wintemute's longstanding commitment to understand the nature of firearm violence and its underlying causes has produced a uniquely rich and informative body of research on firearm violence that directly improves the health and safety of Americans and has positioned California and UC Davis as national leaders in efforts to break the cycle of gun violence.

Dr. Wintemute has conducted and published findings from numerous studies on gun accessibility, connections between gun ownership and violence, and related topics. He has testified before Congress and served as a consultant for the National Institute of Justice; the Bureau of Alcohol, Tobacco and Firearms; and Centers for Disease Control and Prevention.

American Board of Family Medicine, 1980

Wintemute GJ. Frequency of and responses to illegal activity related to commerce in firearms: findings from the Firearms Licensee Survey. Electronic publication ahead of print by Injury Prevention, March 11, 2013.