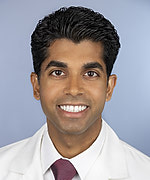 My philosophy of care is to provide my patients with the most accurate and up-to-date information to allow them to be most informed and educated when making medical decisions.

I view medicine as a team effort, and one in which I will work together with my patients to prioritize their interests and lifestyle when making individualized decisions that suit them and their families.

Dr. Sampat is a neurologist and sleep medicine specialist, offering care for adults and children with  sleep-related breathing and neurologic disorders.

He has a special clinical interest and expertise in conditions that interface between neurology and sleep medicine, such as restless leg syndrome (RLS), narcolepsy, and REM behavior disorder (RBD).

American Board of Psychiatry and Neurology,