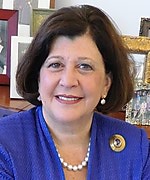 Lydia Howell is an anatomic and clinical pathologist well known for her work to improve methods and protocols for prevention, diagnosis and treatment of breast and cervical cancer. She provides clinical service in cytopathology, fine-needle aspiration biopsy and surgical pathology.

As the Director of UC Davis Health’s clinical laboratories, she oversees nearly 40 faculty members and more than 400 clinical and academic staff who provide comprehensive laboratory testing for UC Davis Medical Center and other hospitals and clinics through Northern California.

A leader in her field, Howell is a past president of the American Society of Cytopathology (ASC), former chair of the ASC’s Foundation, and the 2017 recipient of Papanicolaou Award, the ASC’s highest honor. She has pioneered methods for cervical cancer screening, including liquid-based preparations and computer-assisted methods. An advocate for high quality screening, early detection and diagnosis, she has provided leadership in standardizing practices that improve quality, outcomes, and access for the under-served through her participation in state workgroups, national consensus conferences and panels, and chairs the Pathology and Hematology Device Subcommittee for the US Food and Drug Administration.

Howell is also known for her commitment to faculty development and served as co-principal investigator for a $1.27 M NIH grant studying the effect of family-friendly policies on women’s careers in medicine, as well as the project leader for an Innovation Award for faculty career flexibility from the American Council on Education and the Sloan Foundation. She co-founded UC Davis Health’s award-winning Women in Medicine and Health Science program, and co-led it for 15 years.  She chairs the Leadership Development and Diversity Committee of the Association of Pathology Chairs (APC) and co-founded and co-directs the APC’s Pathology Leadership Academy.”

As chair of the Department of Pathology and Laboratory Medicine, she oversees faculty and academic staff who conduct leading-edge basic and translational research, and advance education and training at all levels within the field.

American Board of Pathology, Cytopathology, 1989

Papanicolaou Award, highest honor of the American Society of Cytopathology, 2017