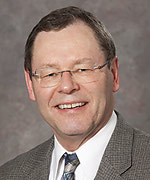 Dr. Berglund oversees all aspects of the School of Medicine research portfolio, with responsibility for strategic planning, space assignments, matching and bridging funds, and representing the school at the institutional and national level. He works closely with center directors and department chairs in strategic recruitments and development of research initiatives.

Berglund also is emeritus director of the Clinical and Translational Science Center (CTSC), and was responsible for all of the center’s infrastructure activities, including services, education and translational science projects. He serves as principal investigator for the health system’s KL2 and TL1 training grant programs, which accelerate the career development of promising junior faculty and pre-doctoral students. Through these activities, he has mentored a wide range of trainees, including undergraduate and graduate students, fellows and junior faculty.

Berglund also serves as one of three principal investigators for the UC Davis FUTURE program, which is funded by a NIH Director’s BEST award to develop novel career pathways for graduate students. He has participated in Clinical and Translational Science Award network activities and served as the inaugural co-chair of the CTSA Steering committee.