Thousands of subs were sold on the Day of Giving at local Jersey Mike’s locations. 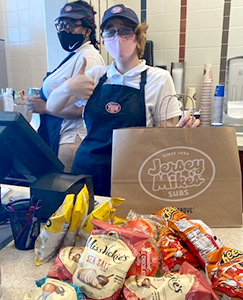 Stocking up on snacks to support UC Davis Children’s Hospital.

“I can’t thank Jersey Mike’s and their customers enough for rallying to raise so much money for CMN at UC Davis,” said Michelle Tafoya, program director of Children’s Miracle Network at UC Davis. “The pandemic led to the cancellation of the 2020 Month of Giving. I was thrilled just to be able to participate this year. And then to get the news that they raised more than $80,000, I was blown away. Wow. Just wow. We can help so many more kids with their support.”

The chain raised $15 million overall to help more than 200 charities nationwide during the company’s 11th annual fundraising campaign. This total is double the amount raised in 2019 when the company donated $7.3 million to local charities. Since Month of Giving began in 2011, Jersey Mike’s has raised $47 million for hospitals, youth organizations, food banks and more.