Emily Love‘s journey with leukemia is memorialized in beads. Every poke, every procedure, every hospitalization, measured in colorful little treasures.

It’s a visual story that could span the length of a room.

There’s a large black bumpy bead that represents her mobility challenges. Emily’s refusal to walk was one of the first indications that something was wrong before her diagnosis.

The blue star represents surgery for her bone marrow biopsy.

The musical note was given to her for participating in music therapy at the hospital.

“Emily’s beads are reminders that she can overcome any test or procedure because she has already survived so much,” said Christina Love, Emily’s mother. “Now more than six years after treatment, Emily has this strand of beads as a tool to tell the story of her courage in her fight against leukemia.” 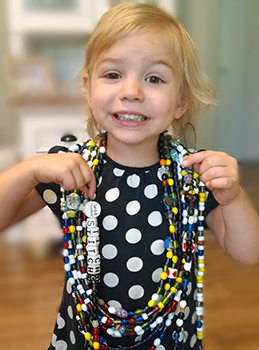 At UC Davis Children’s Hospital, the Beads of Courage program supports cancer, heart, and neonatal intensive care unit (NICU) patients, as well as children with chronic conditions. The program has been funded in the past by the Keaton Childhood Cancer Alliance, Children’s Miracle Network at UC Davis and by the Child Life fund. It is currently supported solely by Donut Dash donations and by its founder Zack Wandell.

Every string of beads is different, based on the medical journey of the child. Different colored beads represent challenges that children faced:

“[Beads of Courage] brings some happiness into some awful situations and I’m just really thankful for it,” said Laura Little, who has two children with kidney disease who have participated in Beads of Courage program. She was so moved by the program at UC Davis Children’s Hospital that she decided to get a tattoo of Beads of Courage on her forearm.

Jenny Belke, Certified Child Life Specialist in the UC Davis Pediatric Infusion Room, said that the beads are a powerful reminder of what these children have endured with strength and bravery, one bead at a time.

“Many of our patients end up having hundreds of beads. It gives parents the opportunity to talk with their children, using the beads to show them, ‘This is everything you have been through. You were tough and you had courage, and we got through it as a family,’” Belke said.