Patient gives thanks to team that saved her life, her baby and found her a home 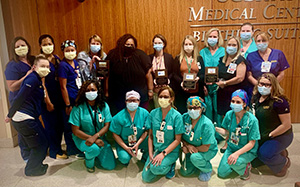