Unleashed: how a doggie day care was the perfect fit for employee and employer (video)

This is a story about hope, opportunity and a chihuahua named Bruiser. It takes place at Cha Cha’s Doggie Daycare in East Sacramento, where 34-year-old Ashley Robertson has been working since October of 2020.

“I’m usually more of a cat person,” she said, but then quickly added, “but I like dogs just as much.” 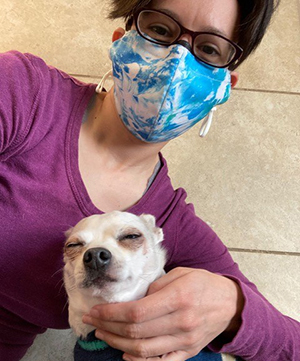 Robertson has autism, and her job at Cha Cha’s is supported by Progressive Employment Concepts, which assists businesses that hire people with developmental disabilities. Progressive is a partner of the Northern California Business Advisory Council, part of the Center of Excellence in Developmental Disabilities at the UC Davis MIND Institute. The collaboration introduces business to qualified applicants who have disabilities, which increases diversity, equity and inclusion at regional workplaces. Job options for people with developmental disabilities are very limited. So, the Business Advisory Council acts as a bridge between employers and the agencies that can provide support to businesses through the onboarding and training process.

Cha Cha’s owner, Desalene Jones, was moved to contact the MIND Institute when she noticed that an after-school center next door, where kids with autism used to gather, closed due to the pandemic.

“I wanted to know how I could help; how I could be the change,” she said. The Business Advisory Council discussed her vision and connected her with Progressive Employment Concepts, and they introduced Robertson as a possible hire.

But working at a doggie daycare isn’t for everyone, Jones warned. “The dogs are loose here and running around and it’s different from a lot of typical kennels, when you have 30 dogs jumping on you. Ashley walked through and was interested, and it seemed like a good match.”

And it has been. Robertson now works 16 hours a week.

On a recent workday, Robertson described her duties at Cha Cha’s, while nuzzling her favorite dog at the daycare. 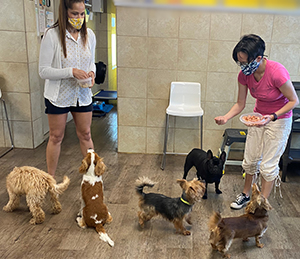 “I like this little chihuahua named Bruiser because he’s really sweet,” she explained, in between cuddles. “I like to play with the dogs and I also like to do nap time with them. They’ll lay down in whatever space they can find, and I usually sit with them. I also do leash work, feed the dogs their lunches and I also often clean up their messes,” Robertson said.

Of course, that comes with the territory at a place whose website proudly proclaims #MustLovePoop.

As part of the arrangement with Progressive Employment Concepts, Robertson makes a regular wage and has a job coach, Marlene Mangabat, who joins her at work part of the time. Cha Cha’s also receives financial assistance while Ashley is being trained. The goal is to gradually decrease Mangabat’s role until she’s not needed.

“One of the biggest rewards of being a job coach is to see the changes,” said Mangabat. “With Ashely, we were worried about her learning the dogs’ names, but she learned them quickly and then was able to give them commands, so just to see her improvement, it’s like --‘wow!' -- you can see the confidence growing.”

• Contact the Northern California Business Advisory Council
• They’ll set you up with a supported employment agency that’s part of the team
• They’ll assist with locating qualified applicants that you can interview
• At no cost, the agency will assist with pre-screening, training and ongoing, long-term support and retention of the employee, including a job coach
• Help expanding diversity, equity and inclusion programs at your business.
• Get more information about the Business Advisory Council here

That growth is one of the benefits of the program, said Steve Ruder, community health program supervisor with the Business Advisory Council. He noted that an employee’s development opportunities often lead to a successful, long-term relationship.

“Employers tell us all the time that these hires are incredibly competent, that they are loyal and that they are oftentimes the face of the business,” Ruder said. “Some have been with their company for a decade or longer.”

In 2016, the Business Advisory Council reviewed workers supported by two partner agencies and found that of the 91 employees, 22 had worked for the same company for a decade or longer, and eight had worked for the same employer for at least 20 years. “Many of these companies are in the service industry,” explained Ruder. “The fact that a third of these employees have been at the same company for ten or more years is truly astounding.”

Jones noted that Robertson is still in learning mode, and so are her other employees. “She’s still developing her skills and is doing well with specific tasks, such as cleaning. I think it stretches her a bit when little things happen, like a dog attacking the mop, but she’s doing really well,” she said. “As a business owner it’s helpful to have someone that enjoys doing those tasks.”

Jones said a recent training session with her whole team and Mangabat via Zoom was very helpful, too. “I didn’t realize what a benefit that would be. It improved communication between Ashley and my other employees, but much of what we all learned could be used outside of work, too, in terms of communication and universally helpful concepts,” she said. 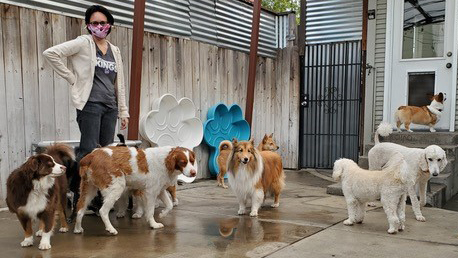 In fact, it’s been so successful that Jones has now hired a second employee with developmental disabilities through Southside Unlimited, another supported employment agency that works with the Business Advisory Council. Her advice to other employers considering the idea is, “Do it!”

As for Robertson, she says the job at Cha Cha’s has helped her to realize how much she enjoys working with animals and plans to continue doing so. “The job is very rewarding, and I see it as a blessing – and a success,” she said.