Through the 19th century, the hospital was guided mostly by just one County Physician, Dr. George Amos White, who held the post from 1872 to 1904, with an interruption from 1879 to 1881, when the county briefly put homeopathists in charge. White initiated the use of spinal anesthesia in surgery, a first for Sacramento and a procedure that had been developed in Europe not long before. He also brought in one of the area’s first X-ray machines and helped develop the first clinical laboratory in the region.

In its first decades, the hospital established its legacy of caring for the poor and underserved.

In addition, in its first decades, the hospital established its legacy of caring for the poor and underserved. In 1891, the county authorized burials for indigent patients on the hospital grounds. The first person was buried in 1897, the last in 1927. (In 2004, 72 patient remains were reinterred at the Sacramento County Cemetery on Fruitridge Road).

Meanwhile, about 15 miles west of the Sacramento County Hospital, something new was about to grow. At the time, it was unconnected to the county hospital, but more than a half century later, it would change the face of health care in Northern California, just as it changed higher education for the region. At the end of the 19th century and into the 20th, the University of California, a land-grant university system dedicated to research, realized it needed a university farm. It needed research into the conditions specific to California for agriculture, which had become a mainstay of the state’s economy. On March 18, 1905, the University Farm Bill was enacted calling for a University Farm.

In 1908, the University Farm opened and began offering its first short-course farmer’s classes to the public.

It took the Regents a year to choose from among 50 possible sites. Then in 1906, they spent $104,250 to buy 778 acres of what was once the Jerome C. Davis farm – which in 1858 had won a first-class rating from the California State Agricultural Society. The farm was connected to the small town of Davisville. (The town renamed itself Davis in 1907). In 1908, the University Farm officially opened and began offering its first short-course farmer’s classes to the public. The following year, it would enroll 18 students and begin offering a three-year non-degree vocational program. A half century later, it would become a general campus of the University of California and carry along sweeping changes that would transform the Sacramento County Hospital into a world-class health care facility.

But in 1908, the hospital struggled at times. It was receiving complaints about unsanitary conditions from the city Board of Health and the press. The Society for Medical Improvement (which was then the name of the Sierra Sacramento Valley Medical Society, the regional branch of the California Medical Association) followed up that same year with an investigation. It recommended the hospital hire a full-time superintendent to oversee operations as an administrative officer, and that the superintendent hire a staff of visiting physicians. The changes took a decade to implement, but a full-time resident superintendent took over in 1918 and the hospital added visiting physicians to the staff.

The influenza pandemic that swept across the world in 1918-19 hit Sacramento and the Central Valley hard. The County Hospital turned over two wards to the Red Cross to care for flu patients. In one two-week period, more than 300 people died. By the end of the pandemic, more than 5,000 people in a city population of 70,000 had been sick and more than 500 had died.

The 1900s – medicine and the hospital continue to evolve

In 1915, a citizens’ group set down the foundation for a modernized hospital with proposed plans to remake or rebuild the county hospital and to have it grow to a 500-bed facility. County and health officials bought into the plan, and by 1916, builders started on a nurse’s home. Construction over the next decade-plus included a men’s surgical ward, women’s surgical and maternity wards, a children’s ward, a men’s infectious ward, a women’s medical ward and an administration building.

The remake was completed in 1929 at a cost of $1 million. The hospital had a pavilion-type layout, with buildings connected by porches and tunnels. The skeleton of the main building, which was incorporated into a 1950 expansion, remains today as part of the north-south wing of the current hospital. It is scheduled for demolition in the 2020s.

As part of that long-term plan and the hospital’s continuing support for people in need, a home for aged men, seven miles south at Franklin Boulevard and Florin Road, and a home for aged women at the rear of the main hospital, were both finished in 1932 and run by the county hospital. 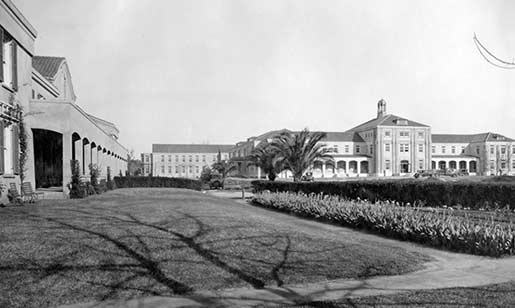 A new hospital building with new pavilions opens in 1929, at a cost of $1 million.

This March 27, 1929, photograph from the southwest corner of the Sacramento County Hospital looks toward the facility’s 243-foot wide administrative building. To the left of the photograph are the three southern wards of the hospital. Courtesy of the Special Collections of the Sacramento Public Library.

The hospital’s operations continued to evolve in the 1920s and medical care continued to advance. As a snapshot of the times, in 1923 the city of Sacramento had approximately 70 practicing physicians. About 80 percent were general practitioners. Nurses worked 72-hour weeks for $90 a month. And one of the great medical battles was against pneumonia, which had a mortality rate of approximately 35 percent. 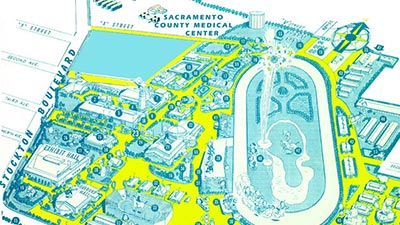 In 1908, the California State Fair had moved from various spots around the Capitol to become a next-door neighbor of the Sacramento County Hospital, with the fairgrounds growing to more than 200 acres in the 1930s. By 1938, it was the largest state fair in America…. 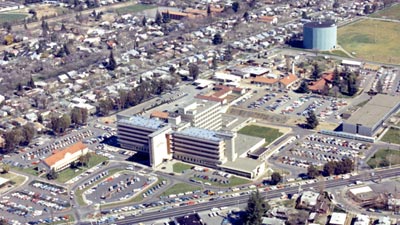 In 1966, UC Davis School of Medicine was forming in a few temporary buildings in Davis. Its founding vision, which still guides the school today, was to become an academic, research and medical powerhouse that could change health care and the world….