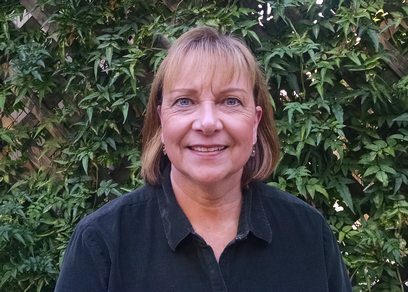 No one expects a diagnosis of cancer, particularly at a time when the career is in full bloom, the body healthy and nothing at all seems awry.

But Cindy Baumeister got that call in 2010. She was just 53, and going great guns in her job with Intel when an ultrasound done to investigate a symptom she thought was related to menopause revealed a mass on one of her ovaries. The cancer was fairly advanced, staged at 3C. But Baumeister took on the diagnosis with the same focus and energy she always gave to every aspect of her life.

Baumeister’s care at UC Davis began with a hysterectomy followed by six rounds of chemotherapy. The treatment put her into remission, but blood tests and a subsequent PET scan revealed that the cancer had spread into her abdomen. Her gynecologic oncologist at the time asked her if she would participate in a clinical trial of two drugs, including a chemotherapy agent and a novel agent designed to inhibit blood vessel growth from surrounding tissue into a tumor.

The results were very encouraging. “I had three tumors,” she said. “Two of them disappeared and third decreased to less than one centimeter.”

Baumeister stayed on the weekly treatment for four years. But when a CT scan in May 2015 revealed new cancer growth, her doctors looked for another option.

“When it came back, my oncologist said I should treat the news like anything else on any other day. ‘Keep a positive attitude. Don’t think of it as a death sentence,’ ” she recalled.

Like other diseases such as high blood pressure and diabetes, Baumeister saw her cancer as something that could be managed with drugs designed to extend her life.

“You have to be an advocate for yourself and have a positive attitude,” she said. “You can have your pity party, but you can’t stay there. You have to get out of that funk.”

She was enrolled in a phase 1 trial of a different new drug, one developed to elicit an immune response against her cancer. The drug had already shown effectiveness in other types of tumors, and doctors had reason to believe it could work in advanced ovarian cancer, too. There was no more chemotherapy, and treatment was a single infusion once every two weeks.

The treatment was successful, and while the tumor didn’t disappear, within five months it had shrunk more than 50 percent. Baumeister also regained her energy and lost the weight she’d gained from taking a steroid during another treatment.

Today, she is in partial remission and receives an infusion at the Cancer Center once a month.

“I feel awesome and am doing well,” Baumeister said. “The clinical trials and medical care I received have been great, and have given me longevity.”

Since retiring from Intel in 2014, she’s been able to travel and spend time with family and friends. She plans to move to Florida next year to be closer to her brother and sister-in-law.

Baumeister has also helped friends who developed cancer navigate through the disease.

“I grasp life differently now,” she said. “I’m taking full advantage of every day, and am glad to share my experience and help others in any way I can.”