Looking forward to the future and helping cancer patients 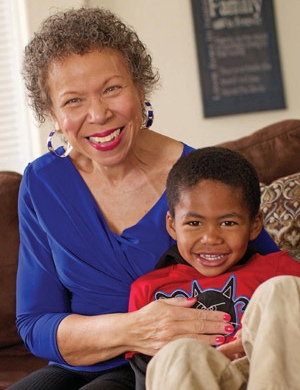 Toni Carter is living a full life – she enjoys traveling and spending time with her three grandchildren. It’s hard to imagine that she was diagnosed with breast cancer in August 2011.

“It’s by the grace of God that I found the lump,” she said. “It didn’t show up in a mammogram. I can’t stress enough how important it is to do self-exams.”

Carter’s diagnosis was triple negative, a complicated breast cancer with fewer treatment options. She had a lumpectomy, followed by chemotherapy and radiation. She completed treatment in May 2012.

Carter’s radiation oncologist at the UC Davis Comprehensive Cancer Center told her she was a candidate for a large randomized clinical trial investigating the role of accelerated partial breast radiation. The trial compared standard whole breast radiation, which takes up to six weeks to complete, versus treatment designed to conform the radiation dose to the tumor cavity and lasts just five days.

Carter, who is African American, was eager to participate.

Today, Carter is cancer-free and living in Sacramento. She still sees her doctor for a check-up every six months “just to stay on top of things,” she said.

Now 67, Carter enjoys spending time with her grandchildren Zaniyah, 15, Alina, 13, and David, 8 and her daughter and son-in-law, Michaelin and David. She also loves to travel and visit friends and family across the country.

“I’m looking forward to the future,” she said. “I’d like to help patients who are undergoing cancer treatment, and volunteer in the children’s ward at UC Davis. I learned how to knit, and want to start a knitting club to make blankets for kids.”

She’s grateful for the care she received at the cancer center.

“I couldn’t have had a better experience,” she said. “I had doctors who were just wonderful and really listened to what I was experiencing. They took the time to talk with me – not just about my disease, but also about my life, which can affect your health.”