Dedicated to helping other cancer patients through clinical trials 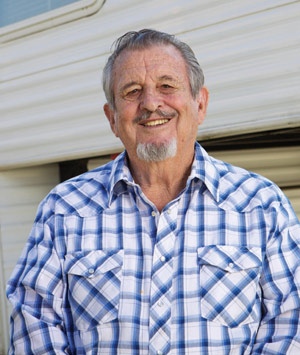 After 88 years, the twinkle in John Dorton’s eye hasn’t faded. He lives each day with a sense of adventure, curiosity and hope for more to come.

Dorton, who lives in Lockford, a place he likes to call “a nice little cowboy town” in San Joaquin County, tackled his lung cancer diagnosis several years ago with the same spirit.

Dorton was living in Arizona when he developed a cough that wasn’t going away. His wife had died two years earlier from lung cancer, so he wasn’t taking any chances. Doctors there detected and monitored suspicious lesions on his lung. When a biopsy eventually yielded a cancer diagnosis, he moved back to California, where his son lives, for treatment.

He chose UC Davis Comprehensive Cancer Center because “the doctors there saved my granddaughter’s life. I knew they were reliable and I trusted them.”

Dorton was not a candidate for surgery, but Megan Daly, his radiation oncologist, said he was an excellent choice for a clinical trial designed for patients with early-stage, non-small-cell lung cancer. Because Dorton's lung tumor was located in the central chest area, Daly said standard doses of stereotactic body radiation therapy (SBRT) might be too toxic. She opted for a different approach, in which he received additional SBRT treatments in escalating doses. Dorton responded well to those treatments and didn’t experience any significant side effects.

"I have accomplished a few things in my life, but I figured that if I participate in a clinical trial and it helps someone else and it’s successful, I’ll feel like maybe I was a little part of it."
∼ John Dorton

Recently, Dorton found out that the cancer has returned and is undergoing more tests so that Daly can come up with the best treatment plan.

“This is a different type of cancer, and we’re still trying to figure it out,” he said. “I have a lot of trust in Dr. Daly and UC Davis, and understand that there’s something new that I may try besides radiation. I’m hopeful for the future.”

A retired operating engineer, Dorton has lived, worked or traveled through every state in the U.S. except Alaska. He’s been on barges in the ocean, worked on dams, operated giant cranes and installed tons of pipe, including off the San Francisco coast. He recently visited the New England states, which were the last he wanted to visit to complete his travel bucket list.

Dorton says he’s happy to participate in clinical trials for the benefit of other cancer patients.

“I’m here to help,” he said. “If I can help someone else with cancer who comes after me, then I want to do whatever I can to make it easier for others.”