Cancer free and feeling on top of the world 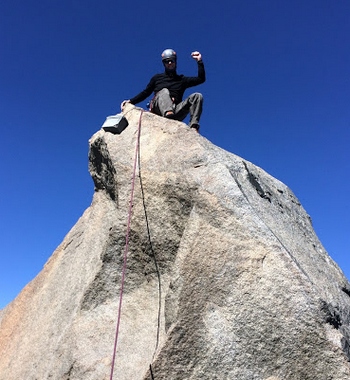 John Gallagher first noticed a lump under his jaw right before his annual physical in 2011. His primary care physician at UC Davis Health said it might be a sinus infection that had caused a lymph node to overreact.

When the lump didn’t clear up Gallagher was referred to an ear, nose and throat specialist, who performed a biopsy. The diagnosis was throat cancer, and he was referred to Gregory Farwell, a specialist in head and neck oncology.

Through several examinations, including an exploratory procedure to obtain tissue samples, Farwell and his team determined that Gallagher’s cancer had started in his tonsil and spread to a few lymph nodes. It was diagnosed as stage IV, due to the size of the tumor and the fact that it was in several different locations.

Gallagher underwent surgery soon thereafter. His surgery had two parts: external, to remove the lymph nodes from the neck; and via a robot (or minimally invasive surgery), which removed the cancerous tonsil via the mouth.

Surgery went smoothly, but a week later Gallagher experienced a frightening moment. At home, he happened to cough pretty hard and felt a little blood going down his throat. Gallagher later learned that this is a relatively common occurrence for adults who have had tonsils removed — more mature veins and capillaries have a higher risk of scabbing and then losing scabs, causing bleeding.

He and his wife called the team and rushed to UC Davis, where they were waiting to triage him. Farwell, who had been out at dinner with his wife, came to the hospital to do the surgery and cauterize the wound inside his throat.

“Dr. Farwell chose to leave his dinner and do the procedure personally, even though another doctor could have done it,” Gallagher said. “That’s exceptional — I consider that above and beyond.”

After healing from surgery, Gallagher began a regimen of five weeks of chemotherapy and six weeks of radiation, done concurrently. “The radiation was the biggest challenge,” Gallagher said.

Despite the challenge, his recovery has been remarkable. In November 2016, Gallagher was pronounced cancer-free.

“I’m totally healed,” he said. “The last time I saw the doctor was a year ago, and now I only have to go in if something comes up.”

Life has returned to normal for Gallagher, who lives in Sacramento with his wife and owns and manages a commercial property management company. In his spare time he enjoys fly fishing and skiing, and recently learned how to fly light sport aircraft.

But his favorite activity is mountain climbing. Less than a year after his treatment, Gallagher climbed Mount Whitney in Sequoia National Park, the tallest mountain in the lower 48 states. His goal is to climb all 15 of California’s 14,000-foot peaks, and he’s already conquered ten of them.

“Now it’s not the cancer slowing me down, it’s the age thing,” joked the 61-year-old.

Gallagher said he’s enjoying life and making the most of each day.

“I feel so lucky to have had Dr. Farwell treating me with such wonderful technology and exceptional care,” he said. “It helped make this bad experience seem like just a bump in the road.”