Portrait of a cancer survivor 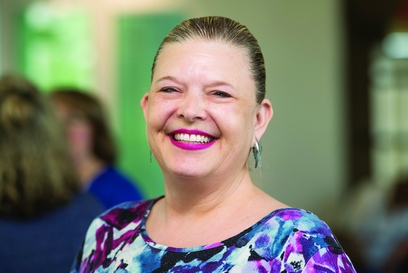 Tura Jenkins was already emotionally shaken from a family death when she was diagnosed with Stage III endometrial cancer. Treatment was aggressive and included chemotherapy, external and internal radiation treatments, and blood transfusions (and an extra treatment for an allergic reaction to one of the chemotherapy drugs).

Jenkins admits she mentally broke down twice during her year-long treatment. The first time was when she learned she would lose her hair to chemotherapy. The other time was when she had to have a port inserted in her chest.

"I don’t like having stuff under my skin that isn’t supposed to be there!" she says, able to laugh about it now. Other emotional hurdles came with the loss of another family member, and with early menopause (she’s in her 40s) due to treatment.

"The building you come to is more important than you think, and the cancer center is radiant... You need positive, bright things. It can give you hope."
~ Tura Jenkins

But Jenkins became a pro at finding ways to keep her spirits up, such as painting her face green before radiation treatment (her "radioactive zone" look, she calls it). And she found comfort in her aesthetic surroundings.

"The building you come to is more important than you think, and the cancer center is radiant," she says. "You need positive, bright things. It can give you hope."

She also found solace in her health-care team. "I can’t stress enough how wonderful every single individual in the facility is, from top to bottom," she says. "The staff is loving and compassionate, and my doctors and all the nurses were fantastic. I really would not have done as well without them. I consider them all family, which may seem kind of weird since you’re only around for a year. But when people save your life, it makes a huge difference."