“Each day is a precious gift” 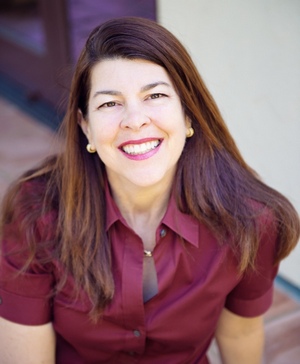 In October 2017, Elizabeth Lacasia celebrated an important milestone — the 10-year anniversary of her lung cancer diagnosis.

“I’m very fortunate to still be here,” she said. “I’m stable, and there’s no evidence of disease on my scans. I have active disease and will be on treatment for the rest of my life. But when people see me they have no idea I have cancer, and that’s how I like it.”

An avid scuba diver and downhill skier and at the height of her professional career, Lacasia never imagined she would develop lung cancer. It took a year and three different doctors in the Bay Area to arrive at the diagnosis — and only after ruling out acid reflux disease and allergies as possible causes of her symptoms.

Finding an effective treatment for her “bronchioalveolar carcinoma” proved even more elusive until 18 months later when she contacted Dr. David Gandara at the UC Davis Comprehensive Cancer Center. Gandara, a leading lung cancer expert, has brought much needed attention to the growing number of young women diagnosed with lung cancer.

By the time Lacasia came under Gandara’s care, she had already endured two surgeries — one to remove a lobe of a lung and another to remove a chunk of the other lung. But her cancer continued to spread. She had also been on a clinical trial including a chemotherapy later identified as being ineffective against her type of malignancy. After eight months on that regimen, the disease continued to progress.

Gandara began with a leading-edge battery of molecular and genetic tests to determine whether her tumor would respond to drugs designed to target particular genetic mutations. The test panel also identifies which chemotherapies would be more effective in fighting her disease. Lacasia’s cancer was a “wild type,” meaning her cancer did not match any identified mutations for which targeted therapies are specifically effective. Nevertheless, Gandara determined she was a good candidate for an available clinical trial because of his experience with similar lung cancer patients.

Gandara said his patient is a "poster child" for the growing number of younger women who have never smoked but get lung cancer. But unlike the majority of that group of women, Lacasia’s tumor tested negative for the usually present EGFR gene mutation.

“Through an innovative UC Davis Thoracic Oncology Program clinical trial, chaired by Dr. Tina Li, Lacasia was treated with a novel schedule of the EGFR inhibitor erlotinib combined with chemotherapy,” Gandara said. “While ordinarily antagonistic if given together, this novel schedule enables the patient to get the best of both therapies.” 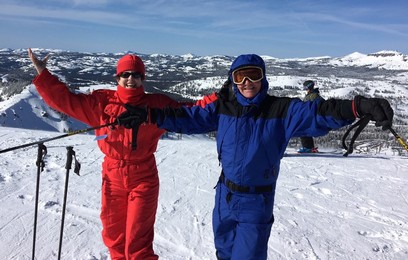 Elizabeth skiing with her husband

Lacasia responded strongly to the combination treatment and remained on that treatment regimen for almost five years. When her disease progressed additional genomic testing was conducted which identified her as having a rare lung cancer mutation called ROS1. Lacasia is doing well as she once again achieved “no evidence of disease” status on her targeted cancer therapy now going on three years. She takes this oral therapy twice a day and visits the Cancer Center four times a year for follow up appointments.

Today, Lacasia enjoys skiing again with her husband and helping with his business of designing and building homes. She also enjoys reading, gardening and writing poetry.

“I’m trying to get back to a more normal life,” she said. “I remind myself that each day is a precious gift, and try to make the most of it.”

Lacasia is also passionate about helping other lung cancer patients, and developed a web site (www.lungpedia.com) that shares her experience and perspective on battling the disease.

“I think the world of the Cancer Center – it’s a wonderful institution,” she said. “I want to do what I can to help others facing this terrible disease.”