Enjoying life and time with great-grandchildren 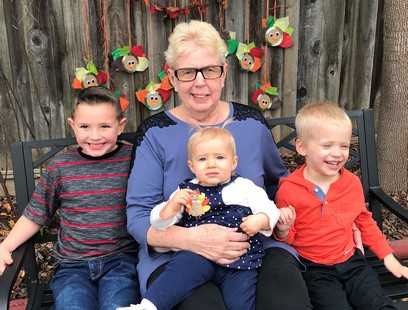 Barbara Mooney with her great-grandchildren

When Barbara Mooney was first diagnosed with cancer in October 1999, she didn’t think she would see her grandkids grow up. Now, she babysits her three great-grandchildren.

“I would never have dreamed of it,” Mooney said. “Let me tell you, it is a blessing.”

The journey has been one of great triumph for the 76-year-old native New Yorker, thanks to the innovative care she receives at UC Davis Comprehensive Cancer Center.

Mooney first saw her doctor because of mysterious back pain. She thought it was arthritis, but after an MRI, she learned she had non-Hodgkin’s lymphoma.

“To tell you the truth, I was very surprised,” Mooney said. “I mean, everybody is shocked, but it’s very real when (after you start chemotherapy) your hair starts to fall out.”

She took time off work while undergoing therapy. When she finished treatment in 2001, the return to work was harder than expected. Every day, she commuted from her home in Staten Island to her office job in upper Manhattan.

Mooney eventually decided that she couldn’t work anymore and moved to Elk Grove, Calif. to be closer to her family.

With the move she came under the care of Joseph Tuscano, a hematologist-oncologist specializing in blood cancers at UC Davis Comprehensive Cancer Center. She learned that although her cancer was relatively slow-growing, it was resilient.

She was put on several different drug regimens, but her cancer kept resurfacing — sometimes multiple times per year.

“Generally, people who relapse after initial chemotherapy have a very poor prognosis,” Tuscano said. “It’s usually an indicator of a very resistant disease.”

In 2008, Tuscano enrolled her in a clinical trial combining Rituximab (Rituxan), a drug she was already taking, with Revlimid. The hope was that the immunomodulatory activity of lenalidomide (Revlimid) would combine with the B-cell antibody activity of the Rituxan to more effectively fight the cancer. UC Davis was the first cancer center to try this combination of drugs for this specific indication, making Mooney one of the first in the world to have the therapy.

She experienced a dramatic remission, and today there is no evidence of disease. Although declared cancer-free, Mooney continues to receive therapy as an insurance policy against recurrence. She’s still part of the clinical trial and goes to the Cancer Center every four months for treatment.

These days, Mooney spends most of her time with her three great-grandchildren. Ryder, Blake and Brynn, (her “little princess”) and who range in age from 1 to 6 years old. Mooney is also expecting a fourth great-grandchild in 2018.

“I’m living a quiet life and enjoying the time with my family,” Mooney said. “I’m very grateful to Dr. Tuscano and the cancer center.”