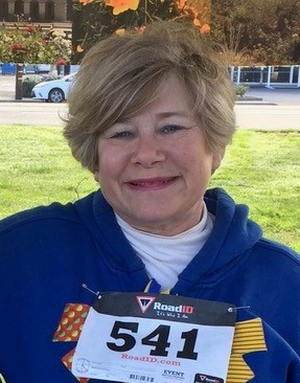 Joanne Wellman’s mother and paternal aunt both had colon cancer. So when Wellman, a health educator, began experiencing vague and atypical gastrointestinal distress, she knew to report both her symptoms and family history to Jeffrey Applebaum, her UC Davis Medical Center primary care physician.

Applebaum recommended that she increase the frequency of colonoscopies to every five years, instead of the 10 years recommended by the Centers for Disease Control and Prevention. Because it happened to be five years at that time, Wellman underwent her next colonoscopy.

Colonoscopies typically detect growths only in the large intestine. But because Wellman also informed the gastroenterologist, Amar Al-Juburi, about her family history, he was particularly meticulous. He discovered a carcinoid tumor in Wellman’s small intestine.

Gastrointestinal surgeon Jonathan Pierce performed a right laparoscopic hemicolectomy, which removed the tumor, Wellman’s appendix, lymph nodes and part of her small and large intestines. Of the 22 lymph nodes removed, one showed signs of cancer.

Wellman was then referred to oncologist I-Yeh Gong for follow-up. She’ll undergo follow-up CT scans over the next several years, which should become less frequent with time.

Wellman credits her former work with the California Department of Public Health’s California Cancer Registry to being aware of the importance of regular screenings, particularly if there is a family history of cancer, as well as people being strong advocates for their own health. She is now with Every Woman Counts Cancer Detection Section, another CA-DPH program, where she continues to advocate for regular breast, cervical and colon prevention, screening and control programs.

“If I hadn’t known, I might have waited another five years or for symptoms to occur to have the colonoscopy,” she said. “I can only imagine what the outcome would have been if I’d waited an additional five years to get screened.”

As it turned out, Wellman’s diagnosis was not related to her family history, nor was it attributable to generally known risk factors such as smoking or poor nutrition and exercise habits. Knowing her family history, however, helped her be proactive in saving her own life. And with the knowledge that cancer does not discriminate, she said, she wants her story to be known, as well as help raise awareness for Colorectal Cancer Awareness Month, in March.

“Getting these stories and messages out will help raise awareness and educate the public about the importance of getting regular colonoscopies to prevent colorectal cancer,” she said.

Wellman was pleased with her care at UC Davis Comprehensive Cancer Center. ”I want to acknowledge the great collaborative team of UC Davis physicians and nurses who quickly and thoroughly screened, diagnosed and treated me,” she says. “And I want to let others know that, if detected early, colorectal cancer — in my case, small intestinal cancer — is preventable, beatable and treatable. I cannot express strongly enough how important it is to be an advocate for one’s health. I believe this teamwork of doctors and my advocacy helped to make mine a success story.”