Time was of the essence in treating Lydia Alwan’s osteosarcoma

It was the spring of 2019 and the Alwan family had returned home from skiing when eldest daughter Lydia began complaining of leg pain. Likely a pulled muscle, they thought. But as the pain worsened, it began waking her up at night so her parents made an appointment to see her pediatrician.

Lydia Alwan and her mom, Jessica, during a round of chemotherapy treatment at UC Davis Children's Hospital.

“We took Lydia in and had an exam and x-rays. When we got the news, it felt like the world just stopped,” said Lydia’s mom, Jessica Alwan. Lydia had osteosarcoma.

Osteosarcoma is a type of bone cancer which tends to occur in teenagers and young adults but can also affect younger children.

Treatment for osteosarcoma usually involves chemotherapy, surgery and sometimes radiation therapy. Doctors select treatment options based on the location, size, type and grade of the osteosarcoma and whether the cancer has spread beyond the bone.

“Lydia’s cancer was in her mid-femur and there was no time to waste,” Alwan said. “We had to get up to speed quickly.”

Alwan and her husband began their quest to get the best in surgical and oncological care for their daughter.

“To save her leg, we needed an expert surgeon, but we also needed a great oncologist,” Alwan said. “We discovered both at UC Davis Children’s Hospital and were confident in her team to guide us in making some of the most important decisions of our lives.”

Musculoskeletal surgical oncologist expert Lor Randall and pediatric oncologist Elysia Alvarez were the dream team the Alwans had hoped for. And they found them just down the hill from their home in Auburn.

“Not only were these doctors the best, they were so close by,” Alwan said. “We knew Lydia’s chemotherapy treatments were going to be intense and would require her to be admitted to the hospital for days, if not weeks at a time. To not have to travel further was a gift. We also have two other children we had to take care of. The location made it easier to manage.”

“UC Davis Health Sarcoma Services is comprised of an integrated team of internationally recognized experts,” said R. Lor Randall, professor and chair of Sarcoma Services. “We knew we were poised to provide Lydia and her family with the very best care to be found anywhere. The team is very grateful for the trust that Lydia’s family placed in us.” 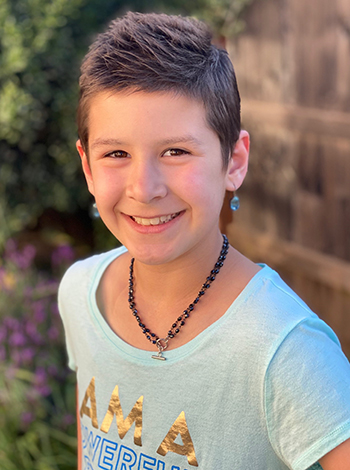 The summer of 2019, Lydia underwent successful limb salvage surgery to remove and reconstruct the section of the femur affected by the tumor and subsequently endured 18 rounds of chemotherapy at the UC Davis Comprehensive Cancer Center, one of only 50 cancer centers in the country to be designated by the National Cancer Institute. Her last treatment was this past January and to date, Lydia’s scans have been clear.

“We are huge fans of UC Davis. They did so much for Lydia and for our family,” Alwan said. “The doctors are amazing and the nurses are the kindest people on the planet. The care team did everything they could to support us and let us know we were not alone.”

Now in monitoring mode with regular scans, Lydia started fourth grade online, with a full head of hair and the ability to walk without a walker. Just this week she was cleared for jogging and bike riding as well.

“The strength that Lydia has shown is incredible,” Alwan said. “She doesn’t fear the future, but instead, truly appreciates the ‘right now’ … just as she did during treatment. Thanks to UC Davis Children’s Hospital, we have all learned how important it is to live in the moment.”