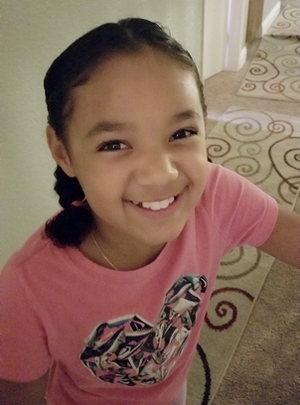 Iryss Holliday is just like any other nine-year-old – she loves drawing, singing, making crafts and watching funny videos on YouTube. It’s hard to believe that she’s also a cancer survivor.

When she was just three-and-a-half years old, Iryss was diagnosed with advanced kidney disease – specifically, Wilms’ tumor, also known as nephroblastoma. Although 500 cases of Wilms’ tumor are diagnosed every year in children ages three to five, only about 50 cases of Iryss’ particular type are diagnosed annually.

Because her cancer was so rare, Iryss’ laboratory samples were sent to a specialized lab to be confirmed by Elizabeth Perlman, a pathology professor in Chicago and the central pathology reviewer for the Children’s Oncology Group Renal Tumor Committee.

After multiple tests, Dwayne Holliday learned that his daughter’s cancer was at stage IV and aggressive, reaching her spine, kidney, liver, lung and intestines, but not her brain.

However, there was also room for hope since this particular type of cancer was highly treatable and had an 86 percent recovery rate.

“It was a three-week process being in the hospital,” Holliday said. “Within the first two weeks, she had her first chemo session. She had 47 tumors total by that time.”

Over the next few weeks, Iryss received chemotherapy to shrink the mass in her abdomen, then had two surgeries – one to remove the enlarged lump from her neck and the second to remove her left kidney. She continued with chemotherapy and then had radiation, which was fairly extensive due to the metastases.

Her care team was able to reduce her treatment time by half, to a total of 15 radiation sessions. After radiation, she endured 31 more weeks of chemotherapy, along with numerous scans and a blood transfusion.

At the conclusion of her treatments, Iryss came through with flying colors. “She has a great spirit,” her father said. “She didn’t even stress when her hair came out.” 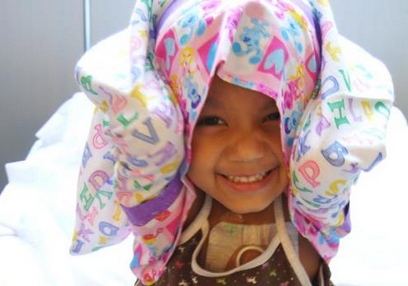 Iryss during her cancer treatment

Today, Iryss is in remission and doing great. She’s in fourth grade and lives with her parents and five siblings in Vacaville, Calif. Holliday, who was a single father during Iryss’ treatment, remarried in October 2016.

“She acts like nothing ever happened,” Holliday said. “She’s always happy, singing, and in a great mood. She maintains a very positive spirit, and everyone feeds off that.”

Her positive outlook and remarkable recovery also made an impact on her caregivers.

“Iryss epitomizes the reason we pediatric oncologists love our profession,” said Anjali Pawar, medical director of the Pediatric Infusion Center. “She had one of the most widespread Wilms’ tumors seen in the pediatric field, and she has come out a winner. She will always be one of my most memorable patients.”

Iryss still goes to the UC Davis Comprehensive Cancer Center for check-ups every six months, and her father said it’s like visiting family.

“We had a very positive experience at the Cancer Center,” Holliday said. “They were very accommodating and supportive to me as a single dad while she was getting treatment. We became really close with the nurses there and at the hospital. They became like family, and we still go visit them when we go in for check-ups.”