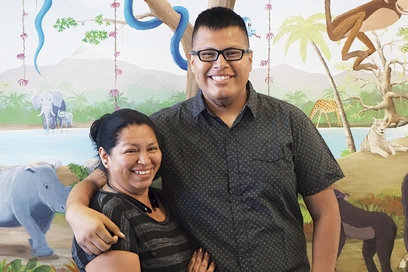 In the summer before his second year at UC Davis, Melvin Florencio Lorenzo was diagnosed with acute lymphoblastic leukemia.

The 20-year-old was terrified.

“The first thing that popped into my head was ‘I have to finish school, I have to get my Ph.D.’ ”

Now 23, Lorenzo not only finished school, but flourished, and can anticipate a promising future as a scientist.

When he was diagnosed, Lorenzo was in the middle of completing not one, but two very difficult degrees: mechanical and aerospace engineering. UC Davis offered a dual degree program so, he thought, why not try rocket science?

The son of Guatemalan immigrants, Lorenzo said his parents inspired him to work hard as a student, and that drive sparked his interest in engineering.

“They never held jobs that were high paying or even stable,” Lorenzo says. “I knew going into college that I wanted to pursue something I was passionate about and make the most of all the opportunities they made available to me.”

But cancer put that in jeopardy. The pediatric team of oncologists and specially trained nurses at the UC Davis Comprehensive Cancer Center doggedly managed his case to help him defeat the disease so he could graduate from college and reach his goals.

Now 23, Lorenzo not only finished school, but flourished, and can anticipate a promising future as a scientist.

Lorenzo’s oncologist Jonathan Ducore said because of his older age at diagnosis, Lorenzo was at higher risk of relapse, so he was put on an aggressive chemotherapy regimen. His intensive, 9-month course of treatment was complicated by liver failure, nerve problems, drug reactions, medication-related diabetes and various infections, Ducore says. Lorenzo was in and out of the hospital.

“One has to wonder how he could get through an engineering program while all the rest of this was going on,” Ducore says. “We periodically had to remind him that he had cancer.”

Indeed, treatment and the competing academic pursuits took their toll.

“I felt hopeless — absolutely hopeless,” Lorenzo recalls. “There were so many assignments and tests, I had no idea what was going on in any of my classes. I wanted to give up, I shed tears just thinking ‘I can’t do it. This is physically impossible.’ ”

Lorenzo cited the added difficulty of distance from loved ones who lived in Los Angeles. Friends and fellow cancer survivors coached him throughout his treatment. Then his mother moved to Davis for six months as he poured himself into his studies.

“She told me that it was okay to take a break, but that if I really wanted to do it, I could,” Lorenzo says. “My mom would drive me to chemo and I would study in the car, and the nurses would give me quiet time to work. That’s the most focused I’ve ever been in my entire life.”

Little by little, Lorenzo squared away his assignments. He didn’t just pass his classes, he made the dean’s list.

“I just knew that since I made it through the chemo and the studying, I could make it through anything,” he says.

Lorenzo is nearly finished with his more than three years of cancer therapy, and recently started a Ph.D. program at Virginia Tech in the Bioelectromechanical Systems Laboratory under Rafael Davalos, where he is at work developing new cancer therapies.

Specifically, the research team is devising a method in which tumors are pulsed by electric fields to create holes in the cell’s membrane and induce cell death.

“Cancer is very near to my heart,” Lorenzo says. “I’ve seen a few friends pass away because the technology isn’t developed as much as it could be. I hope to make a difference.”