Cancer survivor goes from the transfusion center to the football field 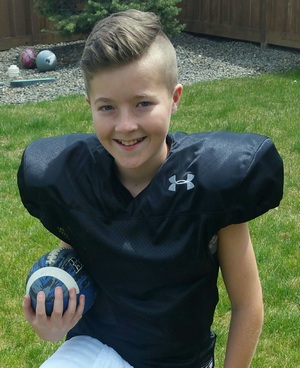 “I played football this season, and really liked it,” said Shane, who is now 13 and in seventh grade.

His recovery is nothing short of amazing. In July 2012, Shane was diagnosed with acute lymphoblastic leukemia (ALL), a disease of the white blood cells and bone marrow. ALL is the most common type of childhood cancer, which affects more than 6,000 children in the United States each year.

Jay Balagtas, the pediatric oncologist who oversaw Shane’s care at the UC Davis Comprehensive Cancer Center, suggested that Shane participate in a clinical trial through the National Cancer Institute’s Children’s Oncology Group. The study evaluated whether modifications of a portion of the chemotherapy regimen minimize toxic side effects of the drugs while still providing excellent survival rates. It also included an assessment of health-related quality-of-life measurements that would serve as the basis for future screening and intervention strategies to minimize side effects associated with ALL treatment.

Shane, who was 8 years old when diagnosed, didn’t escape the difficult side effects from his treatment. As part of standard chemotherapy, he was started on high-dose steroids which caused him to have a severe form of muscular weakness and eventually required him to be in a wheelchair. He also experienced weight loss, dizziness, stomach aches and headaches.

However, the side effects were only temporary, and with hard work and physical therapy, Shane eventually regained his muscle strength. He finished treatment in October 2015. 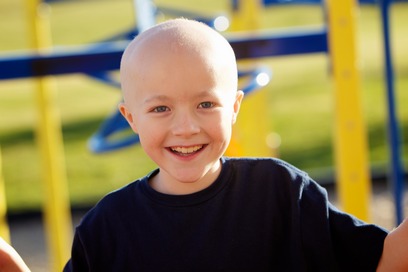 Shane during his cancer treatment

Today, Shane is in remission and lives in Boise, Idaho, where his family relocated from El Dorado Hills. He’s still involved in the clinical trial and goes to St. Luke’s Mountain States Tumor Institute (MSTI) every three months for a check-up and lab work. St. Luke’s MSTI reports back to the Cancer Center to track his progress.

“His labs look like he never had cancer,” Kristen said. “He’s doing fantastic, and we love living in Idaho. Every time we go outdoors, it feels like a breath of fresh air. We’re really happy and loving life.”

In addition to playing football, Shane enjoys doing tricks on his scooter and fishing with his dad.

“I like to fish a lot with family and friends,” he said. “My dad got me interested during the summer, and we usually catch bass.”

Shane is also doing well in school and won the Presidential Physical Fitness Award when he was in sixth grade. This national award recognizes students who score in the 85th percentile in a series of fitness activities, including pull-ups, push-ups and a one-mile run.

“He works really hard and is getting all A’s and B’s,” Kristen said. “He wants to be a paramedic, so we’re considering a high school that has a medical specialty.”

She is thankful that Shane was able to participate in the clinical trial and help others learn from his experience.

“We’re grateful for UC Davis and how well they took care of him,” Kristen said. “We’re doing our best to live life to the fullest.”