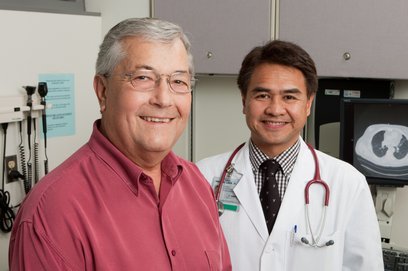 Rollie Swingle was diagnosed with stage IV prostate cancer in January 2004, with lesions detected on his spine, ribs and right pelvis.

Because of the late stage, Rollie’s doctor told him the disease was incurable and that standard therapies were not enough. He urged him to join a clinical trial of a new treatment.

Rollie joined the trial, and for the next six years enjoyed life as he had always done.

“We took cruises – one to Alaska, one to Rome and spent 12 days on the Mediterranean,” he said. “I played sports, I golfed. I spent time with my family. Nothing changed in my life other than the fact that I had this cancer.”

Regular check-ups, laboratory blood work and scans showed the disease was in check.

“But mine is a very aggressive form, and by 2009 my PSA count was on the rise again,” Rollie said.

Rollie’s prostate cancer had become resistant to hormonal therapies, so he chose to try an approach that included a new drug that had shown promise in the laboratory and that researchers hoped might translate to an effective treatment in humans. 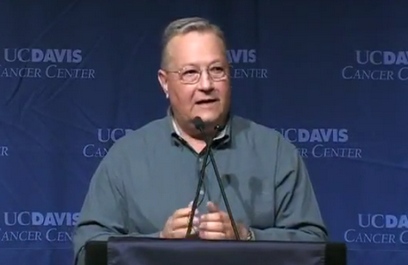 “One of our main goals is to translate advances in cancer research from the lab to the clinic, or ‘from bench to bedside,’ so patients can safely receive breakthrough treatments as quickly as possible,” said Dr. Primo “Lucky” Lara, director of the UC Davis Comprehensive Cancer Center, and Rollie’s oncologist. “With every study he has been on, we seem to have been able to change the way his cancer has behaved.”

Rollie wouldn’t have it any other way.

“Some people think it’s risky to participate in trials,” he said. “For me, being in clinical trials has kept me alive and healthy. I honestly don’t think I would be here today without them.”

Rollie still has cancer, but he is going strong under the care of Dr. Lara. Since 2014, his PSA has dropped from 50 to 6.

With a newly replaced hip, a bypass surgery and cataract surgery, Rollie jokes that he’s more focused on the other ailments of aging than on his cancer.

“Fourteen years with stage IV cancer  ̶  that’s not too bad,” he said. “I guess God isn’t ready for me.”