The impact of giving

Following are stories from grateful patients and donors like you. Read their inspiring stories and find out about the different ways people choose to give to UC Davis Comprehensive Cancer Center. 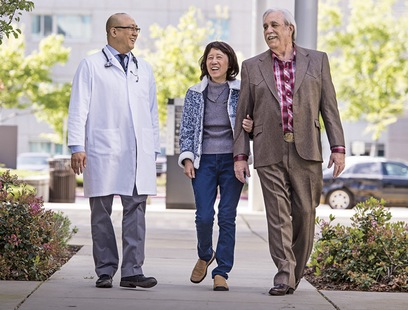 “I had minor gastrointestinal symptoms, not something that I’d usually go to the doctor about,” Cindy says. “But my family doctor ordered a CT scan and ultrasound, and they detected a tumor.”

“Dr. Kim had great insight into treatments and explained that we could get excellent care here,” Cindy says. “He really focuses on helping his patients, and on doing pancreatic cancer research.”

It was this combination of personalized care and a commitment to the science to help find a cure that led the Blumenthals to give to the UC Davis Comprehensive Cancer Center. The couple established the Ken and Cindy Blumenthal Fund for Pancreatic Cancer Research, which will provide $50,000 over five years.

From spaghetti dinner to fundraising powerhouse 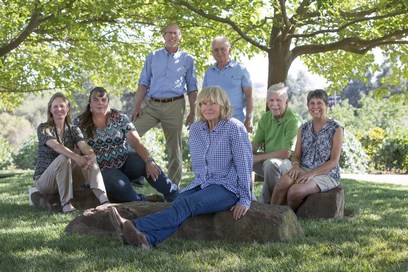 Since its start in 2007, the Amador Cancer Research Foundation (ACRF) has been providing important research support for the UC Davis Comprehensive Cancer Center through their tremendous generosity, hard work, dedication and spaghetti — lots and lots of spaghetti.

Cathy Landgraf, who heads the foundation, is the daughter of Helen and John Landgraf, a couple who started a cancer research endowment in 1973 in memory of their daughter Christine. Today, Landgraf is dedicated to bringing the small Amador County community together to help fight cancer as a continuation of her family’s research endowment.

The focal point of this community-based fundraising has been the foundation’s Spaghetti Western, a big party held every year at Cooper Vineyards in Plymouth, California. 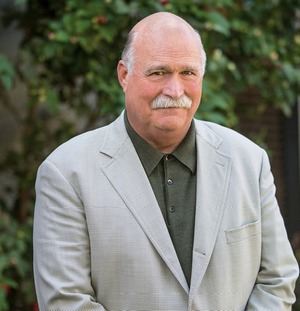 Gratitude is one of the many gifts that come to cancer survivors once they’ve journeyed through treatment back to good health.

Sacramento attorney Mathew Evans knows a thing or two about that, having survived bladder cancer diagnosed more than two years ago to return to a full life complete with family, work, golf, skiing — and service to others going through cancer. Evans and his wife, Carol, want to show their gratitude to UC Davis Health System, where Mathew was treated, by launching a drive for an endowed research chair in the Department of Urologic Surgery with a $100,000 gift.

“I came through it all because of the commitment at UC Davis Health System,” says Evans. “UC Davis has some of the finest, internationally recognized doctors you can ever hope to attract to Sacramento. We have this center of excellence right in our community.”

Over the next few years, Evans plans to actively fundraise for the endowed chair. In many ways, it will be a labor of gratitude. 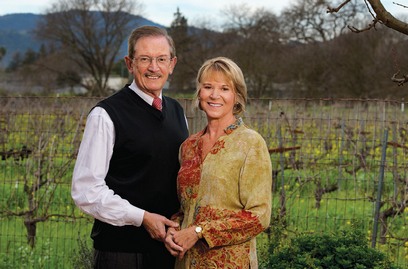 David Gandara has devoted nearly his entire professional career to revolutionizing the treatment of lung cancer.

He will continue that contribution to lung cancer treatment long after his career ends, with the help of a trust he and his wife, Diane Gandara, have established for thoracic cancer research.

“My wife, Diane, and I decided to make this bequest to UC Davis because we believe in the work the cancer center is doing, and we want to make our own contribution to this effort,” the professor and physician explains.

“When we pass, we want a significant amount of our trust to go to this research effort,” says Diane, adding that she and her husband established the trust “as a way to give back to UC Davis.”

Other ways of giving

Patients who found a unique way to give back using their time and talents. 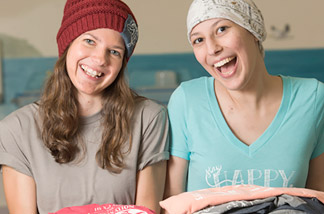 Through Catch Some Air, leukemia patient Kristine and her sister, Brianna, design and sell shirts online in a variety of styles and cheerful colors. For each T-shirt sold, they donate a portion of the proceeds toward free shirts to give away to pediatric patients. 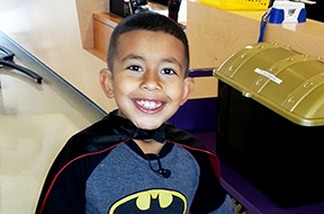 Former cancer patient Cooper Cochran delivers superhero capes and shares a message of strength to inspire children battling cancer. Diagnosed with high-risk acute lymphoblastic leukemia in 2010, Cooper learned a lot about coping with a devastating illness and pays it forward. 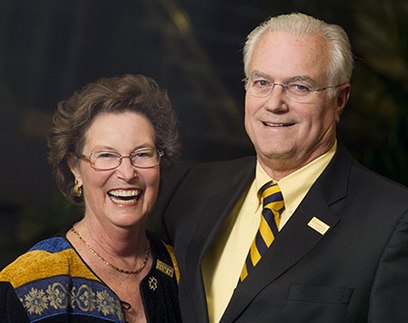 Wayne and Jacque Bartholomew, both alumni and long-time supporters of UC Davis, were on a trip to France led by the late wine authority and renowned UC Davis professor Maynard Amerine to support Shields Library when Jacque Bartholomew discovered a sore on her heel.

"I thought it was an orthopaedic thing," she says. But it was melanoma. Jacque received treatment at UC Davis Comprehensive Cancer Center.

Extending the reach of research 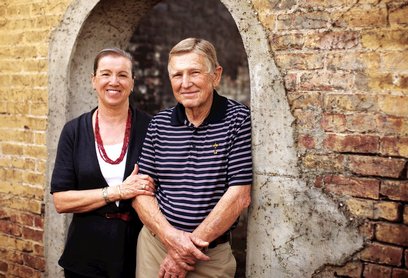 The Auburn Community Cancer Endowment Fund got its start in 2001 after three friends in the Sierra foothills city got together over a cup of coffee and decided to raise money for the war on cancer. By 2006, they had enlisted dozens of friends and businesses in the campaign and had amassed a whopping $1.5 million, enough to fund an endowed chair in basic science research.

Since its establishment, the fund has produced annual dividends of about $70,000 to support work coordinated by Hsing-Jien Kung, director of basic research at the cancer center who also holds the endowed chair in basic research. Kung says the financial help from Auburn is “absolutely critical” to the cancer center’s research mission, particularly at a time when the scramble for federal dollars is more competitive than ever.

Prostate cancer survivor Virgil Traynor and two other friends launched the Auburn Community Cancer Endowment Fund in 2001. Traynor is pictured above with his wife. 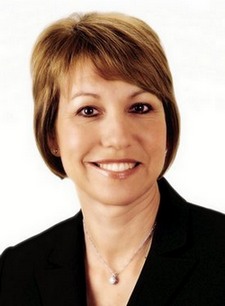 Carol Garcia’s roots reach deep into the city of Roseville – five generations’ worth. That might explain why, after getting her college degree at Sacramento State University, she returned home to raise her family and launch her career.

It’s lucky for Roseville – and the greater Sacramento area – that she did.

Today, the community recognizes her work as a city council member, tenure leading the Roseville Chamber of Commerce and job as senior vice president of Granite Community Bank.

But they may not be aware of her contribution toward finding cures for breast cancer through the Placer Breast Cancer Endowment that she co-established. The group aims to raise $1.5 million for an endowed chair at UC Davis Cancer Center.

Diagnosed with breast cancer in 1998 at age 39, Garcia has taken on the cause with the same kind of energy and enthusiasm she has for her other civic priorities.

The Power of staying positive – and golf 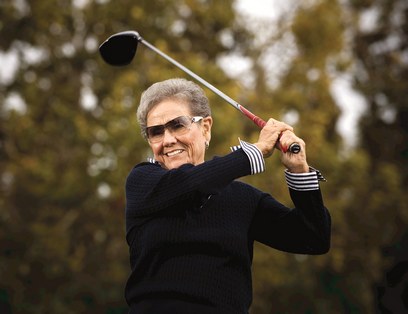 The first thing Barbara Fingerut did when she awoke after breast cancer surgery was to try and make a fist. Even through the pain, she was able to do so.

She was out of the hospital in four days, back to work in nine days and swinging a golf club again in four weeks. Fingerut, who had a complete mastectomy on April 19, 1977, has been cancer-free ever since.

The love of golf and a determined, positive attitude have piloted Fingerut throughout life. Her drive to stay positive has gotten her through everything else, including the losses of her mother and husband to cancer.

Her husband died of amyloidosis, an outcome of multiple myeloma, in 2001. He received his treatment and care at UC Davis Medical Center.

“Both of my family names will be permanently associated with cancer research and the university, and that means a lot to me,” she says. “The endowment is also my hope that our money can help others with cancer. I am very lucky. I am a longtime survivor. And I want others to be very lucky too.”

In pursuit of options

Norman deLeuze fuels the hunt for a nontoxic cure for lymphoma 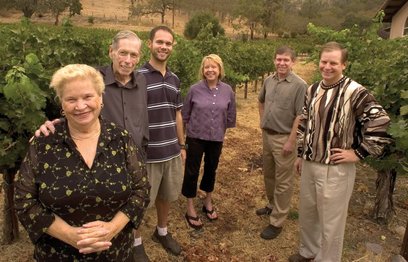 From left to right are Rosa Lee, Norman, their grandson, Brandon, and their children, Julie, Robert and Brett.

Norman deLeuze is a man accustomed to chasing big dreams. In 1968, the engineer teamed up with a colleague at Aerojet General in Rancho Cordova, Calif., to pursue a lifelong goal – the production of world-class wine. Before long, their business, ZD Wines, was born in a rented Sonoma farm building and the partners were producing 350 cases of wine from their first crush.

Now deLeuze is focusing his unbridled determination on another dream – the discovery of a nontoxic cure for lymphoma. Toward that goal, the vintner and his family have established an endowment supporting what they call “the outstanding research approach” of UC Davis oncologist Joseph Tuscano.

The fund was launched in December 2006 with a donation of $313,000 by the deLeuze family, their winery and their friends. DeLeuze is continually seeking outside support for the UC Davis endowment, and hopes it will break the $1 million mark by the end of this year.

While Norman deLeuze lost his battle with lymphoma on Oct. 26, 2007, his family continues to honor his commitment to finding alternatives to chemotherapy and radiation treatments.