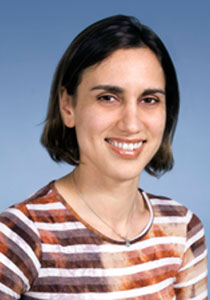 Dr. Soulika received a BSc in Chemistry, from the University of Patras, Greece. She obtained her Master’s degree in Bio-molecules and Applications from the University of Paul Sabatier in Toulouse, France and earned her PhD from the University of Patras, Greece. Her graduate studies focusing on interaction of immune proteins were carried out at the University of Pennsylvania. After completing her thesis, she joined the Fox Chase Cancer Center in Philadelphia as a postdoctoral fellow and later at the Children Hospital of Philadelphia, where she trained at the pathogenesis of disorders of the central nervous system. In 2005, she moved to Sacramento, as a research fellow at the Institute of Pediatric Regenerative Medicine/Shriners Hospital, where, she became an Assistant Investigator in 2007. In 2010 she was recruited as an Assistant Professor at the department of Dermatology at the UC Davis School of Medicine.

The detrimental effects of inflammatory injury in the central nervous system are evident in disorders such as Multiple Sclerosis and Acute Transverse Myelitis. After resolution of inflammation, residual but chronic activation of local immune responses in the central nervous system prolongs and heightens neuronal dysfunction and axonal degeneration, which may lead to permanent neurological disability. Dr Soulika’s research focuses on the delineation of mechanisms that rule uncontrolled immune responses that hinder repair and physiological function of the nervous system.

The lab is also interested in the characterization of immune responses initiated locally in the skin after burn injury. Dr Soulika studies the contribution of specialized immune cells located in the skin (like the epidermal T cells and Langerhans cells) in patients that after severe burn injury exhibit impaired healing. Her working hypothesis is that inactivation of these cells impedes wound healing and tissue reconstruction.