Dr. Izumiya received his undergraduate degree in Veterinary Medicine at Kitasato University, Aomori, Japan in 1997, followed by a Ph.D. degree in Veterinary Microbiology in 2001 at the University of Tokyo, Tokyo, Japan. Between 1999 and 2001, Dr. Izumiya was a fellow of the Japanese Society for the Promotion of Science. After Dr. Izumiya received his Ph.D. degree, he moved to the U.S. and expanded his research from animals to human as a postdoctoral fellow in School of Medicine at UC Davis. As a postdoctoral fellow, he received an award for Excellence in Postdoctoral Research from UC Davis. In 2005, Dr. Izumiya was promoted to the title of Assistant Research Biochemist in the Department of Biochemistry and Molecular Medicine. In 2009, Dr. Izumiya joined the UC Davis Department of Dermatology and was promoted to Assistant Professor.

In his time at UC Davis, Dr. Izumiya was awarded multiple research funds including a postdoctoral fellowship and IDEA award from California HIV/AIDS Research Program, Health Science System Award as well as Translational Research Grant from the CTSC. Other research supports includes grants from USDA and NIH. He also serves as a reviewer for virology related journals such as the Journal of Virology, Virology and Virus Genes. 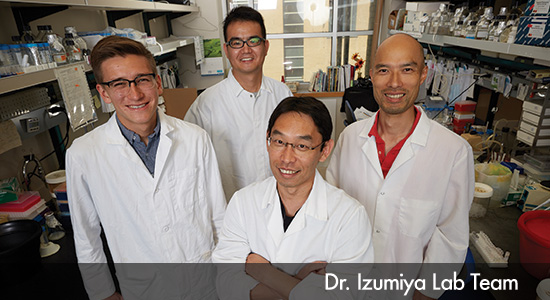 Yoshihiro Izumiya D.V.M. Ph.D. and his laboratory study epigenetic gene regulation by using herpesvirus reactivation as a model system. Many viruses produce an acute infection in the human host and are then cleared by the immune system. However, other viruses, especially herpesvirus, remain in the infected person till death by producing a chronic latent infection. In latent infection, the herpesvirus hides from the immune system by silencing their own gene expression and no infectious virus can be detected during latency. The virus can be reactivated with different external stimuli and will then activate hundreds of gene expression in cascade fashion; this provides us a compelling model to study movement and regulation from “silenced chromatin” to “active chromatin” of host genome.

Dr. Izumiya’s lab is particularly interested in the epigenetic components of chromatin, including host and viral factors that interact to facilitate both the establishment and maintenance of the chromatin state as well as the molecular transitions that take place during reactivation (“chromatin remodeling”). In addition, post-translational modifications that are imparted on critical viral and host factors are also an area of research in his lab. Using a combination of genetic and biochemical approaches, they try to understand the role of host and viral protein modifications such as phosphorylation, methylation, sumoylation and ubiquitinylation on protein function and role in the viral life cycle. Their research provides insights into both the post-translational modifications and chromatin remodeling that governs viral latency and reactivation. Moreover, their research may shed new information applicable to other areas of biology, such as cancer, development and aging, where epigenetic regulation has been implicated.