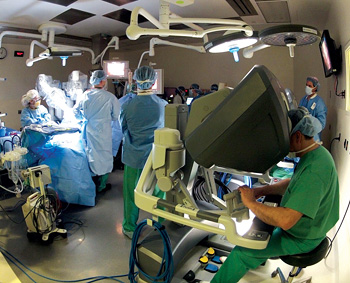 JadeMarie Ross' recent surgery was unique for several reasons. It was her first surgery ever, and it was done at the first hospital in the Sacramento region to use a surgical robot to remove the gallbladder through a single incision hidden in the belly button.

The 19-year-old community college student underwent the new procedure one morning in February at UC Davis Medical Center. She was able to go home that evening without facing as much recovery time or the more noticeable scars associated with conventional minimally invasive gallbladder surgery, which requires multiple incisions.

"I was back on my feet in just two days," said Ross. "And I only missed one class."

UC Davis surgeons have taken the traditional gallbladder procedure to the next level with this new, less-invasive technique, which benefits from the precise control and minimally invasive capabilities of the medical center's surgical robot. The equipment enables them to remove the gallbladder through just one small incision, typically resulting in smaller scars and shorter recovery times.

"We've been doing minimally invasive and robotic surgeries for a number of years at UC Davis Medical Center and were the first in the region to acquire the highly sophisticated equipment in 2002."
— Mohamed Ali

Led by Mohamed Ali, associate professor of surgery and director of minimally invasive surgery, and Tamas Vidovszky, associate professor of surgery, UC Davis surgery teams began using the new technique for gallbladder removal shortly after the Food and Drug Administration approved the procedure last year. The two physicians have now completed more than 40 such surgeries with the medical center's robotic-assisted equipment. A patient's belly button is the sole access point for the mechanical arms of the robot, which enables the surgeons to perform a virtually scarless operation.

"We've been doing minimally invasive and robotic surgeries for a number of years at UC Davis Medical Center and were the first in the region to acquire the highly sophisticated equipment in 2002," said Ali, who was among the first surgeons in California to use a robot in the operating room. "What originally required four separate incisions for the surgical arms and video camera can now be done, because of our advances in equipment, through just one tiny incision that is almost invisible after it heals."

Like other minimally invasive and robotic-assisted procedures, benefits of the new gallbladder surgery can include less pain, less bleeding, shorter hospital stays and faster recovery times. The procedure, known more formally as a "single-site robotic cholecystectomy," takes about an hour in the operating room. Patients typically are discharged within a few hours after the operation.

For the robotic-assisted procedure, a surgeon sits at a console in the operating room viewing high-definition images while using hand and foot controls to move robotic arms that hold tiny surgical instruments inside the patient for cutting, suturing and grasping tissue and organs. The equipment, which is positioned alongside the operating table, translates the surgeon's hand, wrist and finger movements into highly precise, real-time movements of the surgical instruments.

"It is a very advanced and safe way to treat gallbladder problems, and it enables us to perform almost scarless surgery."
— Tamas Vidovszky

Robotic-assisted procedures enable surgeons to operate using much smaller incisions than conventional "open" procedures and allow them to precisely control surgical instruments while having broad, 3-D visualization of the operative field – advantages that can benefit patients.

Traditional robotic surgeries require three to four small incisions as access points for the robotic arms and viewing camera. New and more advanced techniques and technology now allow the UC Davis team to direct its surgical instruments through a single port in the patient's belly button, through which the diseased organ can removed.

"Most people who need to have their gallbladders removed are candidates for this new robotic procedure," said Vidovszky, who also uses the medical center's surgical robot to treat diseases such as achalasia and reflux esophagitis. "It is a very advanced and safe way to treat gallbladder problems, and it enables us to perform almost scarless surgery."

The medical center serves a 33-county, 65,000-square-mile area that stretches north to the Oregon border and east to Nevada. It further extends its reach through the award-winning telemedicine program, which gives remote, medically underserved communities throughout California unprecedented access to specialty and subspecialty care. For more information, visit medicalcenter.ucdavis.edu.