A long way from home, sarcoma patient seeks a cure 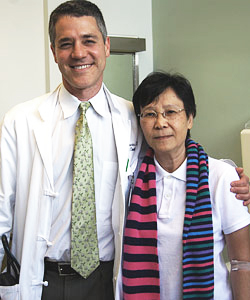 When 64-year-old Janjira Supaongprapa had a third recurrence of sarcoma and faced the possibility of amputation of her leg, she set to work to find the most promising approach to address the aggressive tumor, combing the Internet for options.

As it turned out, she ultimately chose the UC Davis Comprehensive Cancer Center, nearly 8,000 miles from her home in Bangkok, Thailand.

“We were just looking for some better treatment,” Supaongprapa said. “My husband looked at your website. It got my attention.”

What’s novel about the approach, said Canter, is the use of radiation therapy in these patients. Historically, a second series of radiation treatments after a recurrence of sarcoma is not advised.

“The standard recommendation is to avoid repeated radiation because of concerns about the toxicity,” he said.

Typically, patients with recurrences of sarcoma would have surgery, often preceded by chemotherapy. Supaongprapa opted for surgery after her second recurrence, in 2012. But while pursuing natural treatment in Germany six months later, she discovered the tumor in her thigh had returned, now the size of a mango.

Doctors in Thailand recommended amputation of the leg, an option Supaongprapa rejected. Initially, the couple consulted with experts at MD Anderson Cancer Center in Houston, who also recommended she undergo chemotherapy to try to shrink the tumor followed by a third surgery.

“It is a way to target the tumor, deliver effective doses of radiation but spare the surrounding tissue, bones and nerve,” he said. “We think this approach is more targeted.”

Canter and Monjazeb have used the approach in five patients, with excellent results.

“This is changing the paradigm,” said Canter. “Dr. Monjazeb has identified a group of patients who otherwise would have poor outcomes and is trying to innovate to find something that is going to be effective but is not too invasive or has too many side effects.”

“Janjira is young and very active and otherwise totally healthy,” Canter said. “We anticipate that that she will have good long-term function.”

She plans to return to Thailand — and her active life — in early June.