Dr. Maselli completed his clinical and research fellowship in neurophysiology at the University of Chicago under the supervision of Dr. Barry W. Arnason and Dr. Deborah Nelson. During his fellowship at the University of Chicago he became interested in the physiology of neuromuscular transmission of the human and avian neuromuscular junction, which he studied using various techniques, including intracellular microelectrodes, voltage clamp, patch clamp and neurotransmitter microiontophoresis.

At the University of California Davis, he first developed a laboratory of synaptic physiology focused on the study of synaptic transmission in muscle preparations and primary cultured motor neurons. Later on, he expanded the capabilities of his laboratory to perform molecular genetic and molecular expression studies in mammalian cell lines for studying Congenital Myasthenic Syndromes (CMS), which are a heterogeneous group of human disorders of neuromuscular transmission characterized by weakness and muscle fatigability.

Dr. Maselli is currently a Professor in the UC Davis Department of Neurology and Director of the UC Davis Medical Center Electomyography Laboratory.

Laminins are the most abundant non-collagenous proteins of the extracellular matrix (ECM). Laminins are heterotrimeric glycoproteins that support numerous biological processes, including signal transduction, cell adhesion and neurite outgrowth.

Dr. Maselli's research involves the study of the mechanisms by which spontaneously occurring human mutations in synaptic laminins causing CMS result in failure of synaptic transmission by altering the mechanisms of signaling, cell adhesion and neurite growth at the NMJ.

3,4-DAP is a potassium channel blocker that lengthens the depolarization produced by an action potential at the nerve terminal (NT) (Figure 2). The prolonged depolarization induced by 3,4-DAP increases the entry of Ca2+ into the NT through voltage-gated Ca2+ channels (VGCC). Increased Ca2 level at the NT facilitates the release of acetylcholine improving neuromuscular transmission.

CEAD is an autosomal recessive human disorder caused by mutations in COLQ, which is the gene that encodes the collagenic tail ColQ that anchors AChE at the endplate (Figure 3). Patients with CEAD have severe weakness and muscle fatigability, for which there is no available treatment. Dr. Maselli's goal is to treat CEAD patients with mesenchymal stem-cells (MSCs) engineered to secrete the missing ColQ assembled with AChE. To advance toward this goal the team is testing the effect of genetically engineered MSCs secreting CoLQ and AChE in Colq knockout mice which faithfully reproduce all the pathogenic aspects of human CEAD. 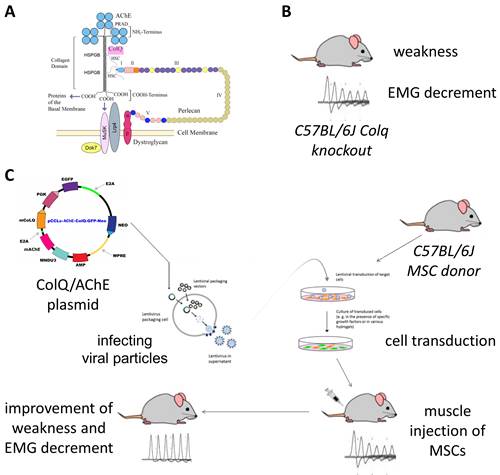 Test the effects of 3,4-DAP in other animal models of human CMS.

Use genetically engineered MSCs for treating CEAD and other CMS forms.