Dr. Olichney is a Clinical Professor of Neurology, board-certified in Neurology and Behavioral Neurology, with expertise in dementia, cognitive electrophysiology and functional neuroimaging.

After receiving his B.A. in Neurobiology at UC Berkeley, he earned his M.D. at UC Irvine. Following his Residency in Neurology at UC San Diego, he completed post-doctoral fellowships in Geriatric Neurology and Neurosciences & Traumatic Brain Injuries at the San Diego Veteran's Affairs Medical Center.

Dr. Olichney has co-authored over 65 peer-reviewed publications and 6 book chapters. He is an internationally recognized expert in Alzheimer’s disease, other dementias, and the electrophysiology and neuroimaging of human memory processes. His lab has developed novel electrophysiological and imaging biomarkers for early Alzheimer’s disease and other neurodegenerative disorders. He directs a cognitive neuroscience laboratory at the Center for Mind and Brain. He also serves as the Clinical Core Leader for the UC Davis Alzheimer’s Disease Center and is the Director of their Clinical Trials Unit.

Dr. Olichney is an academic neurologist and cognitive neuroscientist who specializes in dementia and age-related cognitive disorders. The main focus of his research is on memory and other higher cognitive processes, and how these are affected by Alzheimer’s disease (AD) and other forms of pathological aging. He was recruited from UC San Diego to UC Davis in 2006 to join the Neurology faculty and Alzheimer’s Disease Center (ADC). He has particular expertise in the cognitive neuroscience techniques of event-related potentials (ERPs) and functional MRI (fMRI) and uses these techniques to study memory, language and attentional processes and their dysfunction in neurological disease.

His ERP research has earned international recognition and multiple invited review articles on ERP studies of memory disorders. His laboratory remains on the cutting edge of applying Cognitive ERP paradigms to important clinical neurological entities such as Fragile X-associated Tremor/Ataxia syndrome (FXTAS), Mild Cognitive Impairment (MCI), other amnesias, and AD. His team has developed an ERP word repetition paradigm which reliably elicits and modulates two components (the P600 and N400) which are sensitive to impairments in memory and linguistic/semantic processing, respectively. 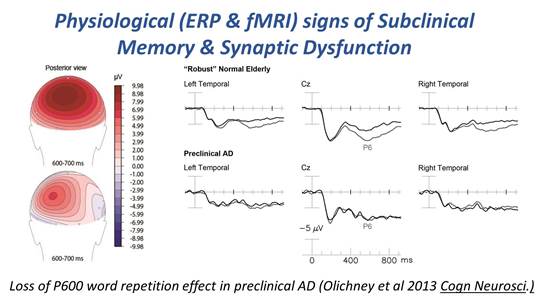 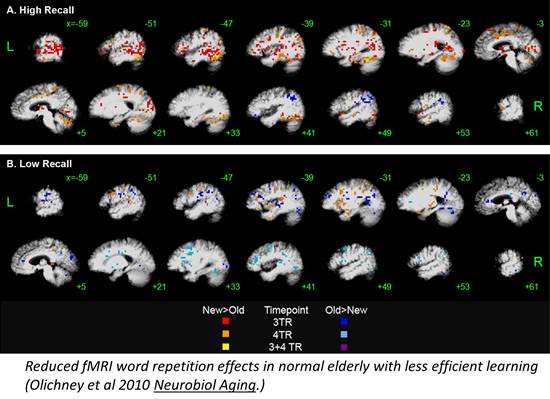 One of the UC Davis Alzheimer’s Disease Center’s main scientific themes is to discover risk and protective factors which modify cognitive trajectories (rates of cognitive decline) in the elderly. They have recently shown that low vitamin D blood levels are associated with faster decline in memory and executive function (Figure 3). Furthermore, vitamin D insufficiency was very common in our multi-ethnic cohort (e.g. ~70% prevalence in African Americans and Hispanics, ~50% in Non-Hispanic Caucasians) making this the most common metabolic abnormality in the cognitively impaired and a finding of high relevance to the public health of our aging population. 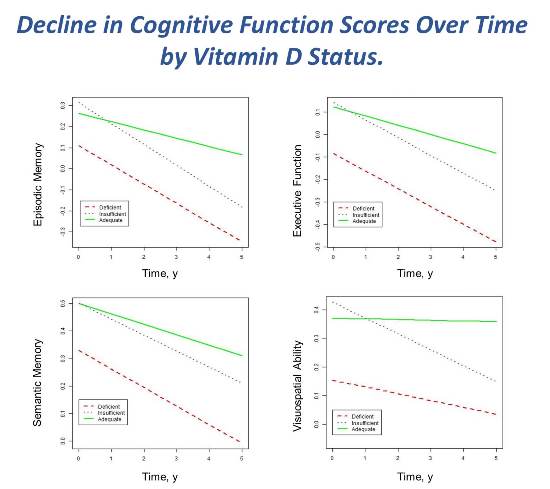 Dr. Olichney’s laboratory is starting a new 5 year project on “Longitudinal Cognitive ERP studies: Advancement for AD Clinical Trials”. This project will quantify the annual electrophysiological changes in elderly persons with and without increased amyloid on PET scan, and will open new frontiers for the application of cognitive ERPs and EEG to disease-modifying and symptomatic therapies for the various stages of Alzheimer’s disease. Other areas where external funding is being sought include a Phase II randomized clinical trial of vitamin D supplementation in older persons with vitamin D insufficiency.