Dr. Seyal is a board certified adult neurologist, epileptologist, and clinical neurophysiologist.

Dr. Seyal is Director of the University of California Davis Comprehensive Epilepsy Program which has been designated as a  Level 4  Center (the highest level) by the National Association of Epilepsy Centers (NAEC).

The prevalence of epilepsy is 4 to 8 per 1000 population.  Epilepsy can occur at any age, with the highest incidence in the first few months of life and in patients over the age 60. In about two-thirds of patients seizures can be well controlled with current antiepileptic drugs. Other treatment options, including surgical options, are available for medically refractory epilepsy.

Several risk factors for SUDEP have been identified, including a high frequency of generalized tonic-clonic seizures (GTCS) , medication noncompliance, young age, and male gender. Most cases of SUDEP occur in the context of a seizure. However, SUDEP is rarely witnessed and the etiology is poorly understood. Seizure-related cardiac arrhythmia, apnea and pulmonary edema, and “brain shut-down” are postulated mechanisms.

A recent survey of SUDEP cases occurring in inpatient epilepsy monitoring units (EMU) (Lancet 2013;12:966-977) during video-EEG telemetry (VET) indicated that a GTCS was followed within minutes by a respiratory and cardiac dysfunction. Cessation of breathing preceded terminal asystole. This study has provided the best available information on the terminal events following a GTCS. However, respiratory dysfunction was inferred indirectly from review of patient videos during and after a seizure with no direct observations of respiratory function and limited cardiac monitoring.

As an epileptologist and clinical neurophysiologist, I am interested in the pathophysiological processes (cerebral, respiratory and cardiac) that occur during and immediately following epileptic seizures. These dysfunctions are likely interrelated and in some unfortunate cases lead to SUDEP. Better understanding of these peri-ictal pathophysiological processes will likely lead to the development of effective interventions to reduce risk of SUDEP.

Patients with medically refractory epilepsy are admitted to the UC Davis epilepsy monitoring unit (EMU) to capture and localize their seizures and determine whether they may be candidates for respective epilepsy surgery, responsive neurostimulation or other surgical therapies. Ours was one of the first EMUs in the country where we conduct fairly extensive respiratory and cardiac function monitoring in addition to standard recordings of EEG and video. This monitoring provides an extra level of safety with nursing alarms being triggered when a seizure is accompanied by significant respiratory or cardiac dysfunction. Data from this monitoring has also provided us with important insights on peri-ictal pathophysiology.

We have shown that seizure-related respiratory dysfunction occurs in about one-third of seizures in the peri-ictal period. Severe oxygen desaturation to below 70% occurs with 3.6% of seizures with concomitant elevation of end-tidal CO2 (ETCO2) to well above 60 mmHg. (Brain 2008;131:3329-3245 , Epilepsia 2010; 51:1359-1364). Abrupt elevations in ETCO2 result in acidosis. Fortunately, as we have shown, prompt nursing interventions in the EMU result in reduction in the peak postictal ETCO2 and ameliorate postictal hypoxemia (Epilepsia 2013; 54:377-382).These observations may lead to effective automated interventions that may reduce risk of SUDEP in patients in their home environment. 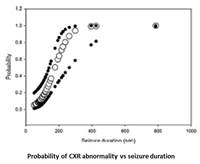 Prolonged respiratory dysfunction despite rapid resumption of ventilation after a seizure suggests that seizures may result in intrinsic abnormalities in the lungs. Evaluation of postictal bedside chest x-rays showed that postictal pulmonary edema occurred in about 29% of patients in the EMU. These findings are transient after a seizure in the EMU but may well be relevant in SUDEP (Seizure 2015; 27:19-24).

We are pursuing studies aimed at clarifying the extent and severity of postictal intrinsic pulmonary abnormalities; seizure-triggered automated devices that may reduce SUDEP risk; and non-EEG technologies that may provide a warning of an imminent seizure.