Message from the Division Head

JoAnn Cannon — Getting back to a "new normal" 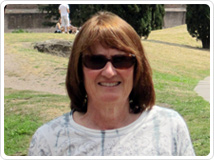 JoAnn Cannon, a 62-year-old retired professor of Italian studies who lives in Davis, Calif., had for years dealt with a condition called achalasia, which causes food to collect in the esophagus and makes swallowing difficult. It also predisposes people to esophageal cancer. During an examination, her doctor found a tumor that had penetrated the esophageal muscle. Cannon knew she was at risk for esophageal cancer. “I kept hoping I had dodged that bullet.”

When the doctor recommended an esophagectomy, Cannon was shocked. “I didn’t even know you could live without your esophagus,” she said. But she opted for the surgery.

"Every cancer should get attention. The thing about esophageal cancer is that over the years I’d heard comments that made it sound like you don’t have much hope if you have it. I was afraid to find out more. But I am delighted to know how one can survive it."
—JoAnn Cannon

Because Cannon’s tumor was caught early—most are diagnosed around Stage 2b or 3; due to her regular examinations, Cannon was diagnosed at Stage 1—she did not require chemotherapy or radiation treatment. “I don’t entirely feel like a cancer survivor because I didn’t have to do chemo or radiation,” she said.

Her recovery has been encouraging. Adjusting to a very short esophagus—it is approximately 2 inches long—and smaller stomach has required significant dietary changes, but she can now eat almost anything in small portions. “It wasn’t hard to swallow,” she said, “but food didn’t taste very good, and it disagrees with me to eat too much, so it was hard to keep my weight up. I have to spend more time planning my eating and more time eating. It was depressing for a while, but I never fell into a deep depression—I just had my bad moments. Now, I am doing very well.”

She also has resumed her very active lifestyle, which includes playing golf, skiing and playing tennis. Her reduced chest cavity means she becomes winded a bit more quickly than before, but she sees improvement and won’t let it stop her.

“It’s true that after surgery you have to figure out what among your normal activities you can return to, and what part of your life has to change,” Cannon said. “I feel very good. I am getting back to a ‘new’ normal.”

Her advice to other patients: “Be patient—you will get your appetite back—and stay positive. Try to return to any activities you are able to do; be sure to rely on a good network of family and friends; get out and walk, do whatever you can. I feel like I have done what they recommended to do, and it has paid off.”

The UC Davis Comprehensive Cancer Center’s esophageal cancer team has developed a program designed to streamline esophageal cancer patient care. The so-called “pathway” guides the nursing staff, medical residents, surgeons and other care providers in eight patient categories ranging from tests and treatments to diet and discharge planning. Use of the pathway has significantly reduced the amount of time patients stay in the hospital and reduced rates of post-surgery readmissions and pulmonary complications.

Although esophageal cancer does not always produce obvious symptoms, signs of the disease may include difficulty swallowing, unexplained weight loss, chest pain, pressure or burning, fatigue, frequent choking while eating, indigestion or heartburn, and coughing or hoarseness. The chance of getting esophageal cancer increases with age, and men have a three- to four-fold higher rate of the disease.

Gastroesophageal reflux disease (GERD), which can cause heartburn, and Barrett’s esophagus, which is caused by chronic acid reflux, pose a risk for the cancer, as well. Use of tobacco (Cannon was a smoker 40 years ago), alcohol and obesity all put people at higher risk for esophageal cancer.
Fortunately, new treatment approaches have lowered the death rate from esophagus cancer, which at one time killed 95 percent of those diagnosed with the disease. Today, about 16 percent of all esophageal cancer patients will survive five years or more.  As with most types of cancer, survival odds increase when the disease is caught and treated early.