Message from the Division Chief

Sheila Usedom says finding out she had esophageal cancer was like being “hit by a Mack Truck.” She was stunned because she didn’t have the symptoms or risk factors typically associated with the disease. 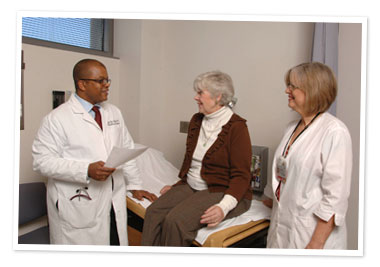 “I don’t smoke, don’t drink and don’t have heartburn,” she said. “I was just having a little trouble swallowing so was sent to a specialist. When he said cancer was a possibility, I didn’t believe him.”

Her general practitioner confirmed the stunning diagnosis – stage 3 adenocarcinoma of the esophagus with lymph node involvement.

“All I could think was, ‘There wasn’t even a reason to test me for cancer,’” she said.

Usedom later learned that she had “silent” gastroesophageal reflux disease, meaning that she didn’t have the obvious, persistent heartburn that indicates stomach acids irritating the esophagus.

She also learned — mostly from a picture drawn by her surgeon — that her cancer was the type that forms in tissues lining the muscular tube through which food passes from the throat to the stomach. There are two forms: squamous cell carcinoma, which is commonly linked with smoking and forms in cells lining the esophagus; and adenocarcinoma, which is often associated with acid reflux and begins in cells that create mucus.

Usedom describes her first meeting with her treatment team — an oncologist, radiation oncologist and cardiothoracic surgeon — at UC Davis Cancer Center as “amazing.”

“I was so impressed,” she said, referring to the group’s teamwork and communication. “They met with me and knew all about my tumor and were ready to talk about what would happen. This is the most wonderful thing about UC Davis.”

Her treatment included six weeks of radiation and chemotherapy to shrink the tumor. Then, after a month of rest, cardiothoracic surgeon David Cooke stepped in.

Cooke is an expert in curative surgery and post-surgery management for esophageal cancer and a specialist in identifying new surgical techniques that improve outcomes and quality of life for patients. He carefully talked Usedom through the process and what she could expect.

But agreeing to surgery was tough for Sheila, who had never been in the hospital. The tech-savvy retiree had spent a lot of time on the computer researching her disease and knew that the procedure involved removing her esophagus and then recreating it with stomach tissue, forever changing the anatomy of her gastrointestinal tract. She also knew, however, that surgery was her greatest hope for a cure.

“I wanted the best possible chance at survival. That meant going for it,” she said.

The 10-hour surgery, which took place in June 2009, was a success. Today, she has regular checkups with her general practitioner and her cancer team, which she looks forward to.

“Everyone I have met in this process has been wonderful. The nurses especially rock,” she said.

She is disappointed, though, that there isn’t as much information readily available about esophageal cancer as there is for other cancers like breast cancer. This is something she wants to change, since myths about the disease could prevent someone from getting the earliest possible treatment.

“I want people to know that it’s not an automatic death sentence, that the treatment has changed quite a bit in the last 10 years and that it is much more tolerable. I want them to know what cancer research and treatment have done for me,” she said.

She also wants people to know that esophageal cancer is not just a smoker’s or a man’s disease.

“It’s really important to be aware of the symptoms,” she says, like the slight difficulty swallowing that initiated her referral to a gastrointestinal specialist. “We all eat and anyone can have heartburn. We all have a risk.”

Thinking back to her initial diagnosis in February 2009, she remembers asking her general practitioner only one question: “Am I going to be here at Christmas?” She has now been through two Christmases, cancer-free.