Message from the Division Head 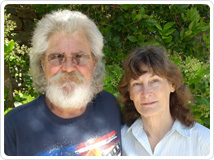 When Gary Hinze found himself coughing up blood after a hard workout, he immediately went to see his doctor and was then referred to a pulmonologist and then an oncologist in Grass Valley, where he and his wife Sandie live. The diagnosis: Stage IIIA lung cancer, with a large right upper lobe mass. The oncologist ruled out surgery, determining that Hinze would require his entire right lung to be removed (a pneumonectomy) and probably would not survive surgery, but did suggest radiation as a palliative treatment plan.

The Hinzes decided to get a second opinion and requested a referral to UC Davis.

They contacted Sierra Nevada Medical Associates in Grass Valley for referral approval and coverage information. Dr. Dan Bibelheimer, director, and his assistant Vicki Anastasion were extremely professional, supportive and compassionate (and continue to stay in touch).

“This group of people made all the difference in the world,” said Hinze. “They saved my life — literally.”
— Gary Hinze

“We felt an instant connection,” said Hinze. He nicknamed Cooke and his team “the pros from Dover,” a reference taken from the movie and TV series M*A*S*H—coincidentally, Cooke’s mentor at Harvard was rumored to be the person whom the M*A*S*H character of Major Charles Winchester III was based upon.

Dr. Cooke took Gary’s case to the UC Davis Multidisciplinary Tumor Board. During this meeting, Dr. Cooke, medical oncologists, radiation oncologists, radiologists and pathologists reviewed Hinze’s case and strategized. Soon after, Hinze began an intensive preparatory chemotherapy and radiation regimen designed by Dr. Kaesberg, a regimen so individualized and unique that even the infusion center found it novel. Despite the heavy regimen, Hinze, a musician who also runs a public access variety show on TV, was still able to play a few gigs during his treatment. Sandie Hinze said, “It’s really incredible how much chemotherapy has advanced and the medications available to help with the side effects.” When Hinze recuperated from his surgery and returned to his TV show, “Clodhoppers,” he dedicated the show to UC Davis and made light of his new “UC Davis haircut.”

Radiation therapy was given under the supervision of Dr. Allen Chen, a radiation oncologist, and Dr. Sinisa Stanic, a resident working under Chen, and all collaborating closely with Drs. Cooke and Kaesberg. “Dr. Cooke and Dr. Kaesberg went the extra mile to study and look at everything, and didn’t just jump to conclusions,” Sandie said. “We were scared, but we had all the faith in the world in them.”

“The results of the radiation and chemo were incredible,” Hinze added. “The thing shrunk so much, they had trouble finding it on the x-ray!”

The surgery, an upper lobe sleeve resection, took place seven months after the initial diagnosis. Through this highly complicated and technical approach, Dr. Cooke was able to remove the tumor, but at the same time preserve the majority of Hinze’s lung, avoiding the need for a pneumonectomy. His recovery began immediately — his health care team recommended getting out into the hallway right away to start walking — and has since been remarkable; he attributes his success to his stamina from hard work and exercise. “I get pretty good mileage,” he said.

His wife added, “He still plays basketball, and he can beat me at tennis!”

For a couple years prior to that, Hinze had also been dealing with a separate minor tumor in his left cheek, one that his doctors at home hadn’t wanted to remove because the surgery potentially can cause facial paralysis. But after the major lung surgery, Cooke said he didn’t want Hinze to have any more tumors. Hinze went to UC Davis Head & Neck Clinic to have the tumor removed by Dr. Quang Luu. Although there was initial numbness during the recovery period (which, because of the difficulty in shaving, resulted in a new beard), there has been no resulting paralysis.

Now cancer-free, Hinze returns for regular check-ups every few months. The couple attribute his amazing recovery not just to getting a second opinion and having the right combination of chemotherapy, radiation and surgery, but to the attitudes they encountered at UC Davis Health System. “Everyone is so wonderful and positive,” Sandie Hinze said.