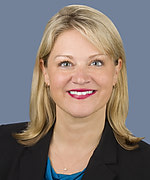 This has provided her the opportunity to speak on a national and international level about the use of advanced endovascular interventions in the treatment of complex aortic pathology, including aortic dissection and aneurismal disease.

Dr. Humphries' research focuses on outcomes and disparities in care for patients with critical limb ischemia.

Her goal is to identify new treatment strategies to prevent limb loss in this population with advanced arterial disease of the lower extremity.

American Board of Surgery - General Surgery, 2010

American Board of Surgery - Vascular Surgery,