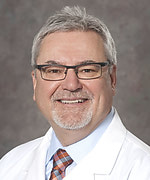 Dr. Jurkovich has looked extensively at some of the major problems in trauma, including new methods of measuring outcome in trauma patients, the role of hypothermia in trauma, alcohol and injury, the immune-inflammatory response to injury, and nutritional support in the critically injured.

Dr. Jurkovich is currently a Distinguished Professor and Vice-Chairman at the University of California Davis Health in Sacramento. In this role, he is responsible for the clinical affairs and quality programs of the department, as well as being an acute care surgeon.

Dr. Jurkovich's current national responsibilities include President of the National Trauma Institute (NTI), co-director of Center for National Trauma Research (CNTR) and serving on the Board of Directors of the Trauma Center Association of America (TCAA). He has held numerous other leadership positions, including just completing a 6-year terms as a Director of the American Board of Surgery, and Chairman of the component board in Trauma, Burns, and Critical Care. He has been the President of the American Association for the Surgery of Trauma (AAST), the Western Trauma Association (WTA) and the Western Surgical Association (WSA). He also served as Vice-Chairman and Chief of Regional Committee on Trauma from 2002-2006, and received two separate meritorious awards for service to the ACS COT. He has also held additional leadership positions in the Association of Academic Surgeons and the Society of University Surgeons.

Dr. Jurkovich is board certified in surgery and surgical critical care. He has published over 350-peer review publication, and 100 book chapters. He has been an active principal and co-investigator in numerous peer-review and externally funded research efforts over his career, with total awards exceeding $28M.

American Board of Surgery,

National Board of Medical Examiners,

American Association for the Surgery of Trauma

International Association for the Surgery of Trauma and Surgical Intensive Care

Reviewer of the Year, Journal of Trauma and Acute Care Surgery, 2018

President, American Association for the Surgery of Trauma, 2008, 2009

Commencement Address, U. of South Carolina School of Medicine, 2002