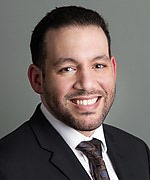 I strongly believe that my role as a physician is to provide my patients with as much clear information as possible so that they can make the best decision based on their individual goals, priorities and beliefs. As a former high school teacher, I see it as part of my duty to explain different treatment options in a way that is clear and understandable. I pride myself on my ability to explain complex disease processes and the treatment options available in a clear and easy to understand manner. I respect my patients wishes, and I understand that every patient has different needs and priorities. I will always do everything I can to ensure that my patient is getting the best possible care that is tailored to their specific needs and wishes. My job is to provide my patients with the most up to date information, and help them make their own decisions regarding their care.

Dr. Maximus has a strong interest in cutting edge technology, but is data driven. He believes in using well studied, safe effective procedures. He enjoys all aspects of vascular surgery, and board certified in general surgery. Dr. Maximus enjoys learning and utilizing new technology in order to provide the safest, most effective and data proven care. He received his medical degree from the University of California, Davis. After completion of his general surgery residency at the University of California Irvine, he completed a rigorous vascular surgery fellowship at the University of Chicago, where he was able to collaborate and learn from vascular surgeons from all over the world.

Dr. Maximus research interests include outcome data regarding endovascular treatment for both peripheral arterial disease and limb salvage, as well as aortic aneurysm repair. He is also extremely interested in long term outcomes of new treatments, and comparing these to standard treatments in vascular surgery. Dr. Maximus is extremely interested in long term outcomes of complex endovascular aortic aneurysm repair.  As a former high school teacher, he has a strong interest in medical education, and continued in this role in medical career as the associate program director of the UC Davis Vascular Surgery Residency program. He has multiple publications in peer reviewed journals, and enjoy contributing to the growing literature in surgery and vascular surgery.