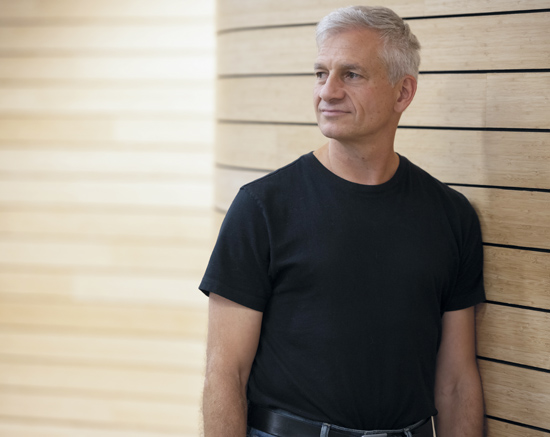 Psychologist and neuroscientist Philippe Goldin is an associate professor at the Betty Irene Moore School of Nursing at UC Davis.

Under most circumstances a clinical psychologist and cognitive-affective neuroscientist such as Philippe Goldin using neuroimaging to conduct research would be affiliated with a psychiatry or neurology department at a medical school. Goldin, an associate professor in the Betty Irene Moore School of Nursing, was head of a Stanford neuroscience research group before he joined UC Davis in 2014 to advance his research through interdisciplinary collaboration offered here.

“The School of Nursing brings together people with varying backgrounds — sociology, anthropology, philosophy, ecology, nurses, physicians — and seeing such an eclectic set of people working together appealed to me,” Goldin said. Cognitive-affective neuroscience is the study of the brain networks that underlie human mental responses as an avenue for developing more effective therapies for psychological disorders.

As leader of the Clinically Applied Affective Neuroscience Laboratory at UC Davis, Goldin conducts wide-ranging studies, including research on the brain networks involved in regulation of emotions; neural mechanisms of mood and anxiety disorders; and the brain’s responses to various forms of behavioral therapy and meditation for treatment of anxiety, depression and chronic pain disorders.

“Neurons need oxygen and glucose when they fire, and through imaging we can measure where blood is delivering nutrients to neurons that are active,” Goldin said. “We know, for example, that many regions of the brain work together to enable empathy toward others, and we can actually measure that in the brain. Such measurement involves physics and math, and it’s incredibly beautiful and one of the most intriguing manifestations of science and human creativity.”

Goldin advocates teaching what he terms as neuroliteracy to clinicians so they can help people better cope with anxiety and other emotional responses.

“Neuroscience could intersect with nursing education by improving understanding of the process of learning. Our research has shown neuroliteracy to be effective in helping people alter maladaptive habits of blaming themselves for perceived mental and physical deficits. We’ve seen it with developmentally delayed adolescents, stroke survivors and people with depression and anxiety,” Goldin said. “Neuroscience has not penetrated nursing yet but helping patients who hold distorted views of themselves gain new insight about brain mechanisms would be an act of kindness.”

Myriad pursuits contributed to psychologist Philippe Goldin’s insights about the human psyche. Goldin devoted himself as a young man to Asian studies, in which he obtained an undergraduate degree. Upon his mother’s urging, New York City-born Goldin enrolled in a study abroad program in Nepal — then returned there for two extended visits.

“I lived with a Nepalese family who spoke not a word of English, so I quickly learned the Nepali language and took classes at Tribhuvan University, Kathmandu, where I studied Islam, Hinduism, Buddhism and Nepalese culture,” Goldin said. He spent four years living in the Dalai Lama’s monastery in Dharamsala, India, where he taught English and studied Sanskrit, Buddhist philosophy and meditation techniques. After meeting and marrying his wife Viveka — who also became a psychologist — he moved with her to her native Sweden, where he studied the history of religions.